Republicans Are Being Confronted by Sexual Assault Survivors | The Mary Sue

UPDATE: These Brave Sexual Assault Survivors May Have Forced an FBI Investigation Into Kavanaugh 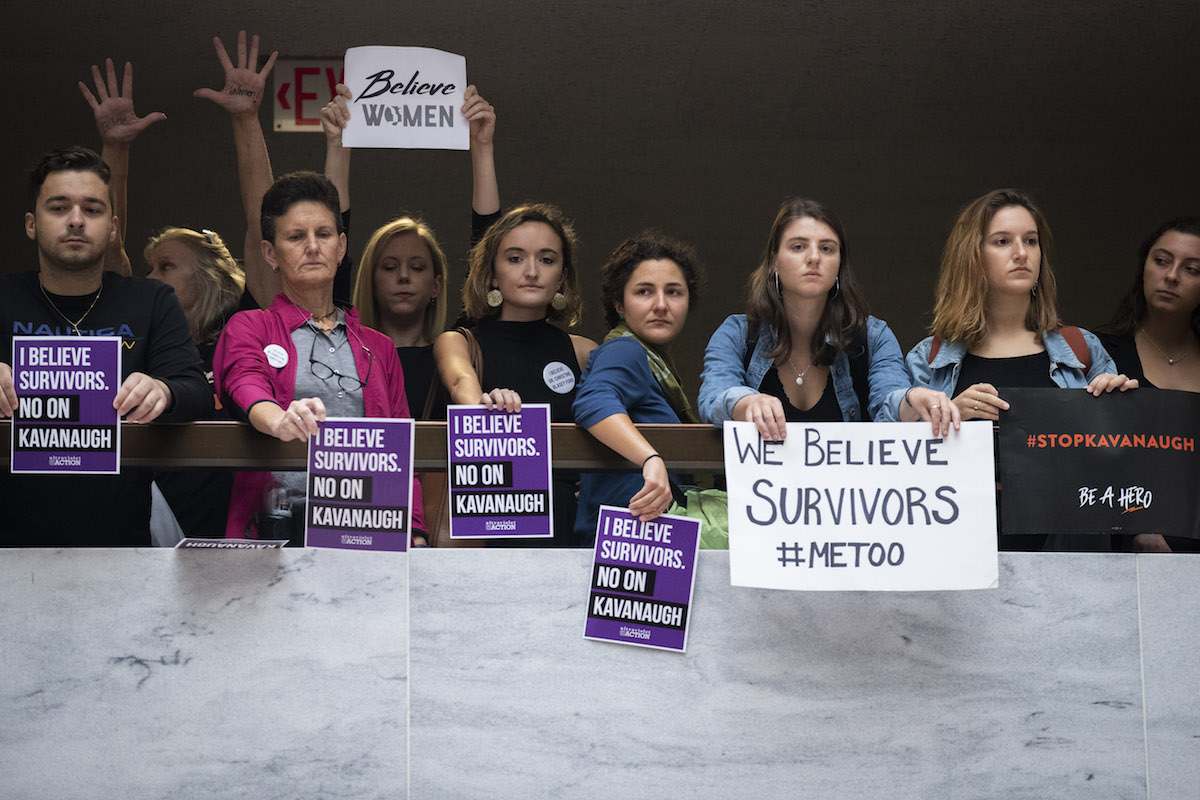 Following yesterday’s emotional day of testimony from Brett Kavanaugh and Christine Blasey Ford, Senate Republicans are pushing forward with a vote to move his nomination from the Judiciary Committee to the full Senate, scheduled for 1:30pm ET today.

Leading up to that vote, a number of Republicans have been publicly confronted by survivors of sexual assault demanding that they listen to their stories and explain their apathy regarding the seriousness of Dr. Ford’s testimony.

Yesterday, gender equality activist Robyn Swirling confronted Lindsey Graham as he was walking away from a news briefing with reporters. (That was when he told them that Democrats had better “watch out” for their nominees.) She told Graham that she had been raped 13 years ago and asked if he believed her. His response was to tell her she should have gone to the cops.

That was me! @LindseyGrahamSC said he did not believe Dr. Ford because she couldn’t recall the exact date of the assault. I told him I was raped 13yrs ago but don’t know the date. So would he believe me?

He said “I’m sorry, but then you should go to the cops.”#BelieveSurvivors https://t.co/UERpDmvBU9

If @LindseyGrahamSC had paused to talk with me, instead of rushing into the elevator, I’d have told him the cops can’t do anything about it now, but that doesn’t make it any less true and doesn’t make me any less credible.

That response isn’t surprising coming from Graham. This is a man who called Kavanaugh’s questioning the “most despicable thing” he’s seen in politics, condemning Democrats for having made up their minds that they believe Dr. Ford while also declaring that nothing will keep him from voting for Kavanaugh.

Jeff Flake, though, was once considered to be a swing vote in the Kavanaugh confirmation. This morning, the Republican from Arizona said he would vote yes to confirm. Moments later, he was cornered by two women as he got into an elevator. They refused to let the doors close and berated him for nearly five minutes.

“You’re telling all women that they don’t matter, that they should just stay quiet because if they tell you what happened to them you are going to ignore them.” pic.twitter.com/lgLeECzpWC

“What you are doing is allowing someone who actually violated a woman to sit on the Supreme Court,” yelled one woman who told the senator she had been sexually assaulted. “You have children in your family. Think about them. I have two children. I cannot imagine that for the next 50 years, they will have to have someone in the Supreme Court who has been accused of violating a young girl.”

“Look at me when I’m talking to you,” the woman said to Flake, who had been looking at the floor and appearing to pretend to push elevator buttons until then. “You’re telling me that my assault doesn’t matter, that what happened to me doesn’t matter, that you’re going to let people who do these things into power anyway.”

I hope rape survivors confront Jeff Flake in public for the rest of his life.

Jeff Flake probably just won himself a lifetime appointment to being told he sucks in public.

Flake refused to answer the women’s questions about whether he believes Kavanaugh was telling the truth, but just thanked them and continued to avoid eye contact.

Like the coward that he is, @JeffFlake has nothing to say to a woman who is urging him to say something — anything — to justify voting for Kavanaugh before numerous sexual misconduct allegations against him have been investigated pic.twitter.com/7EQsDKo24l

Those videos are heartbreaking, and show just how cowardly Flake is. Also, I hate how much this tweet is getting my hopes up:

Please prove us wrong, Jeff Flake, and put an end to this.

Update 1:55pm: The women who confronted Flake have been identified.

Thank you Ana Maria Archila & Maria Gallagher. I’m sorry you had to lay your pain bare to get someone to listen, but I’m so very grateful. https://t.co/6JnjRHx71u

Update 2:20 pm: The Senate Judiciary panel approved Kavanaugh after Flake secured a deal to delay the full Senate vote back a week. He joined the Democrats in urging an FBI investigation during that time. Predictably, the other Committee Republicans are still fighting the investigation, but no matter what happens, there’s no doubt these women made a difference today.