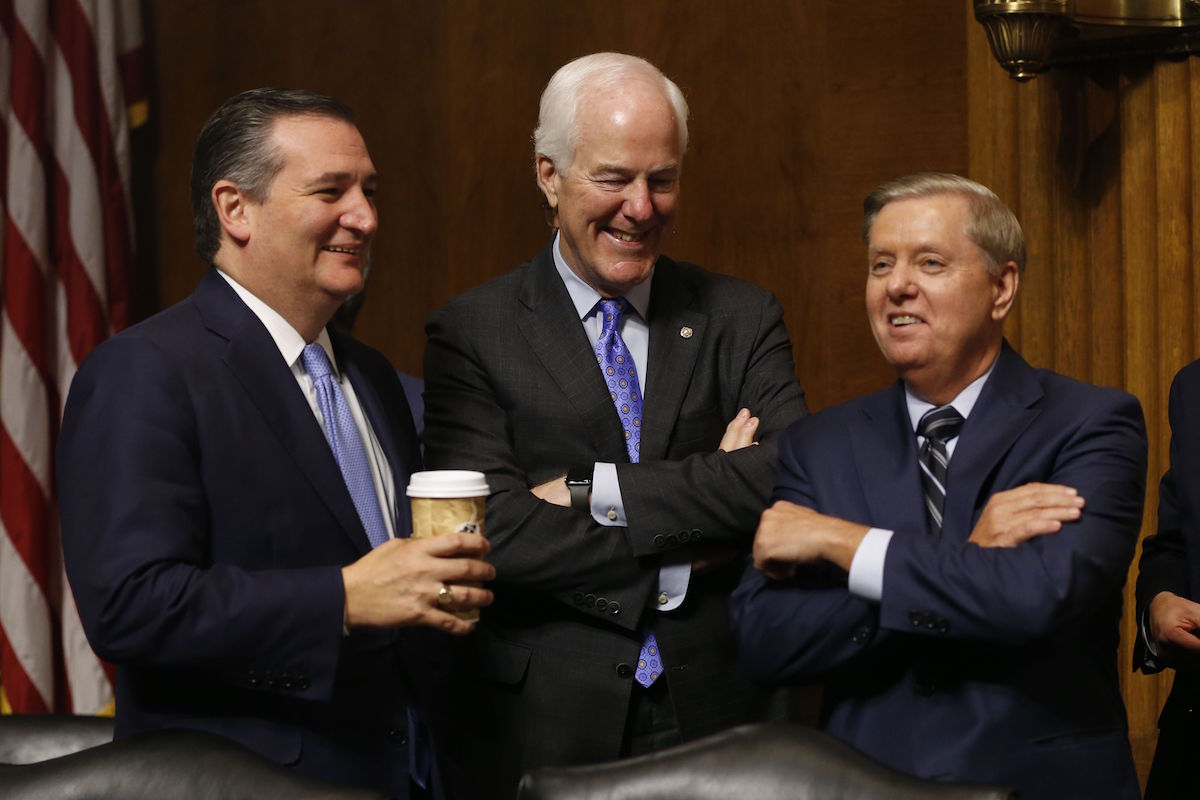 When questioning Dr. Christine Blasey Ford today, Republicans on the Senate Judiciary Committee gave up their time to a female attorney known for prosecuting sex crimes. It’s arguable whether that was a smart move or not. Their hired attorney seemed to harshly interrogate Ford, while the Democrats repeatedly thanked and celebrated her for coming forward.

On the other hand, at least Republicans didn’t have to suffer the optics of 11 elderly white dudes bullying a woman about her sexual assault.

Still, even though they didn’t question Ford directly, those Republican senators still managed to be the absolute worst today.

We’ve already covered Chuck Grassley, the committee chairman, and how he was antagonistic towards Dr. Ford and the Democratic senators, interrupting every single woman who spoke today.

Not a single woman has spoken without Grassley interrupting

“You have another 30 seconds now because I was rudely interrupted,” Grassley jokes (?) to the female prosecutor, as Harris asks if she can have a copy of document handed to Ford.

This is very uncomfortable.

But he wasn’t the only Republican to say awful things, despite the rest of them, again, not being scheduled to speak today.

Let’s start with Orrin Hatch, who, during a news conference during a break in Ford’s testimony, was asked by a reporter if he thought Ford was credible. His response: She’s “attractive.” Also, (gag) “pleasing.”

Senator @OrrinHatch asked if Ford has been credible so far:

And then there’s Lindsey Graham, who was visibly angered by Ford’s testimony. (He also screamed his way through his questioning of Kavanaugh.) He said the hearing was a “political game” on the behalf of the Democrats. He also said that Democrats never face consequences for sexual assault (because he’s apparently forgotten about his former colleague Al Franken) and that if this is the “new normal,” then Democrats had better “watch out” for their nominees (because I guess he doesn’t remember Merrick Garland).

Lindsey Graham just falsely told a bunch of reporters that Democrats are never subjected to accusations of sexual misconduct, and warned them that if Kavanaugh fails, Republicans will gin up false accusations against future Democratic nominees to even the score. Wow.

Still none of those senators were as terrible as Kavanaugh himself. He spent his time alternating between smugly smirking and (mostly) yelling at Democratic senators. Seriously, if you didn’t watch, the amount of yelling cannot be overstated. It was Alex Jones levels of screaming, mostly about beer.

If Brett Kavanaugh were a woman, they’d be calling this performance “hysterical.”

For someone so terrible, he has inspired some great memes.

Tfw you’ve never been held accountable for your actions pic.twitter.com/20qOsUTZa8

I AM A VIRGIN WITH A CALENDAR pic.twitter.com/bkgiOE2tAV

Just let him have Pee-Wee’s bike, and maybe he’ll go away. #KanavaughHearings pic.twitter.com/mmGO2TgcuS