Republicans Knew How It Would Look to Have an All-Male Committee Question Christine Blasey Ford, So They’ve Hired a “Female Assistant”

Or, as people who respect women would call her, a lauded sex crimes prosecutor. 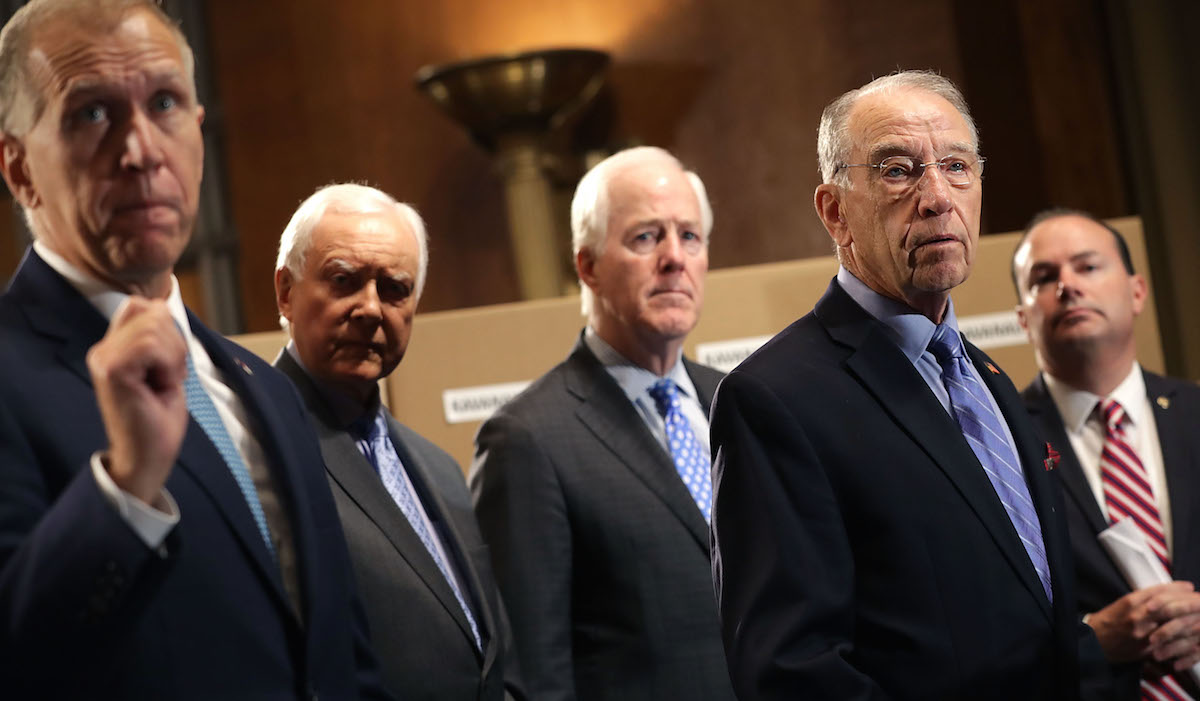 We’re just one day away from Dr. Christine Blasey Ford’s appearance in front of the Senate Judiciary Committee. (And one day away from Trump’s planned meeting with Rod Rosenstein.) Dr. Ford and Brett Kavanaugh will both testify, separately, about Ford’s accusations that Kavanaugh physically assaulted and attempted to rape her when they were both high school students. They will then face questioning from the committee, with each senator allotted only five minutes. (That equals 50 minutes for the Democrats and 55 minutes for Republicans, in addition to opening statements from the ranking members with no time limits.)

In what may be the smartest move they could have made, Republicans have apparently realized how terrible the optics would be to have 11 men questioning Ford about issues of sexual assault, so they’ve hired a woman to do the questioning. The GOP will bring in Rachel Mitchell, an attorney specializing in prosecuting sexual assault cases. (She’s also a registered Republican, but we can’t assume that will influence how she approaches this hearing.)

This does appear to be a smart move for the Republican committee members. No one wants to see a bunch of elderly white men bully Ford about her sexual assault. Chuck Grassley said of the decision to bring in outside counsel, “We have done it because we want to depoliticize the whole process like the Democrats politicized the Anita Hill thing.”

That’s a pretty feeble attempt to convince us that Republicans are the party of human empathy. Yes, Democrats were the majority party in the 1991 hearing, and they were awful to Hill. Even Joe Biden, who was the ranking member at the time, has admitted as much. But Grassley can’t rewrite history to imply that the Republicans on that committee were any better. They weren’t. That committee did a disservice to Hill not because it was led by Democrats, but because there was not one single woman on the committee, from either party. Grassley should know that, as he was there.

But Mitchell’s involvement isn’t exactly a win for Ford or the Democrats. To start, Ford specifically requested she not be questioned by an attorney. As her own lawyer wrote in a letter to the committee earlier this week, “This is not a criminal trial for which the involvement of an experienced sex crimes prosecutor would be appropriate. Neither Dr. Blasey Ford nor Judge Kavanaugh is on trial. The goal should be to develop the relevant facts, not try a case.” The Republicans, once again, are dismissing Ford’s wishes.

They also dismissed Ford’s request that she testify after Kavanaugh. Tomorrow, she’ll be forced to speak first. In the depressingly similar case of Anita Hill’s 1991 testimony, she too was scheduled to speak first, and Clarence Thomas was therefore able to respond directly to her accusations in his testimony.

By bringing in Mitchell, it also means that the Republicans will have 55 minutes (unless some senators do choose to use their time) for one cohesive line of questioning, while Democrats will have only a series of 5-minute increments. The Dems could choose to yield their time to outside counsel if they so chose, in order to level that playing field but they say they won’t. For one, again, Ford requested they not do so. And also, as one Democratic staffer snarkily put it, “Democratic senators feel capable of asking their own questions. [Republicans] apparently feel they need to hire an outside woman.”

Additionally, while Ford is given time to testify and answer questions, Deborah Ramirez, the second woman to accuse Kavanaugh of sexual assault, will not be questioned, despite offering to testify.

A third accuser’s identity has been revealed today as Julie Swetnick, who claims to have attended “well over ten” house parties with Kavanaugh when the two were in high school. In a sworn declaration, she writes, “I observed Brett Kavanaugh drink excessively at many of these parties and engage in abusive and physically aggressive behavior toward girls, including pressing girls against him without their consent, ‘grinding’ against girls, and attempting to remove or shift girls’ clothing to expose private body parts.” She also describes him acting verbally abusive towards girls, “making crude sexual comments to them that were designed to demean, humiliate, and embarrass them.”

Most disturbing, Swetnick says Kavanaugh and his friend Mark Judge would spike the drinks of vulnerable girls at these parties. “I also witnessed efforts by Mark Judge, Brett Kavanaugh and others to cause girls to become inebriated and disoriented so they could then be ‘gang raped’ in a side room or bedroom by a ‘train of numerous boys,” whom she said would form a line waiting for their “turn” with the girls. She says that at one party in or around 1982 she became the victim of one of those trains.

Mark Judge’s college girlfriend corroborated that he had told her that story as well.

Mark Judge, by the way, has been missing for about a week. Washington Post reporters finally found him hiding out in Delaware, at the recommendation of his lawyer. Republicans haven’t shown any plans to insist he testify.

All of this points to the very real possibility that Republicans are bringing in a female sexual assault prosecutor because they feel confident that it won’t change the outcome. Republican senators have made it clear that their minds are made up to confirm Kavanaugh, and the fact that the final vote is (tentatively) scheduled for Friday, less than 24 hours after Ford testifies, doesn’t indicate they’re preparing to give much weight to what happens Thursday.

From the look of it, bringing in Mitchell is a push for good optics, not actual substance, and they can’t even get that right. Cue Mitch McConnell referring to this attorney as a ‘”female assistant.”

Mitch McConnell calls the lawyer the GOP Senators on the Judiciary Committee have hired to do their job of questioning Dr. Ford for them a “female assistant.” And shockingly, none of the other GOP Senators show any surprise at the disrespect. https://t.co/g5jUqOJeNi

A female assistant??? In addition to conducting the questioning of Dr. Ford, will she also make the Starbucks run? https://t.co/QELrBahHZ8

there is a good case to be made that using this “female assistant” reeks of dismissing sexual assault investigations as “women’s work.” That’s so blatantly sexist that I wonder if Dr. Ford & her attorneys won’t refuse such Qs outright. This could easily blow up for the GOP.