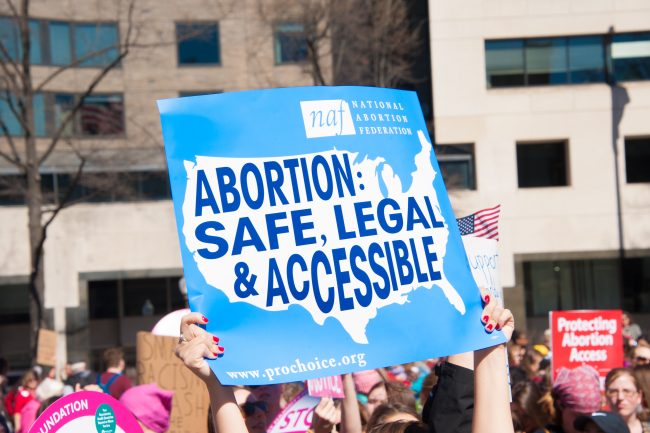 Just one week after Vermont Sen. Bernie Sanders’ “Medicare for All” bill which would have offered abortion coverage for all began to gain traction, Republican Senators Lindsey Graham and Bill Cassidy introduced a new Obamacare repeal bill. The bill would — on top of taking away health care and potentially killing thousands of disabled, sick, and elderly Americans — slash women’s access to reproductive health care.

Obamacare repeal attempts are like a GOP zombie that refuses to die, and it would almost be comical if they didn’t pose continual threats to women’s living standards. Graham-Cassidy, like its previous incarnations, would defund Planned Parenthood and also slash Medicaid funding for maternal care, which really raises a question of whether Graham, Cassidy, and all Republicans, frankly, are “pro-life” or anti-woman.

And I think we all know the answer to that question.

Here’s everything else that happened:

This week, Illinois legislators passed HB 40, a bill that would ensure that Illinois women had access to safe, legal abortion in the event that a Trump-controlled Supreme Court were to overturn the landmark Roe v. Wade ruling. The bill would also allow women with Medicaid and state-employee health insurance to use this coverage for abortion services, which is the controversial part for “moderate” politicians, who refuse to recognize abortion as the legal and objectively necessary medical procedure it is.

However, legislators say they will not send the bill to Republican Gov. Bruce Rauner’s until he states whether or not he will sign it, and Rauner has said he can’t say what he’ll do until he sees the bill. Things are at a bit of a stand-still in the state.

Rauner has a record of signing off on anti-choice legislation, such as a bill he signed last year that would allow doctors to refuse to perform abortion services but require them to refer patients to abortion providers for religious or moral reasons. For obvious reasons, the law pleased absolutely no one, but at the very least it showed that Rauner isn’t as extreme as he could be. Rauner says he’s been meeting with advocates for and against the bill, but it’s unclear when a decision will be made.

After one Planned Parenthood clinic in Kansas City, MO got its abortion license back after it was revoked in 2012 as a result of TRAP laws, a federal judge for the Eighth U.S. Circuit Court of Appeals issued a one-line ruling blocking three other Planned Parenthood locations in Columbia, Jopin, and Springfield from doing the same. The ruling put a stay on a previous April 2017 ruling from U.S. District Judge Howard Sachs that blocked the “undue burden” placed on Missouri clinics by laws requiring abortion providers to have hospital admitting privileges.

These laws existed despite the objective safety of surgical abortion, which almost never results in urgent trips to the hospital. Rather, the laws exist solely to shut down clinics that can’t afford to implement these changes, and either force women to travel miles for abortion services or deny them safe surgical abortion altogether. These laws caused a clinic in Columbia to shut down in 2015.

Sachs’ ruling earlier this year was meant to expand abortion access, but the stay implemented by the Eighth U.S. Circuit this week means this expansion will be substantially delayed if not canceled altogether.

According to a complaint filed by the American Civil Liberties Union and Planned Parenthood of Northern New England, a person seeking abortion services in Maine’s Fort Kent would have to travel more than six hours round-trip to the nearest abortion provider. This is because presently, Maine is one of 41 states that allows only doctors and not health professionals such as nurse practitioners to perform surgical abortions.

The two aforementioned groups on Wednesday filed a lawsuit to overturn this law, citing the undue burden placed on people seeking abortion care in the state, as well as safety concerns.

“Anyone who has made it through a Maine winter in a rural area knows that travel can be dangerous or impossible at times–it’s wrong to make a woman risk a journey of hundreds of miles to get an abortion when there are qualified providers nearby,” Zachary Heiden, legal director of the ACLU of Maine, said in a statement.

Last week, the California state assembly sent Assembly Bill 569, which would prohibit employers from punishing workers who use birth control, have abortions, or make other reproductive health decisions that employers disagree with, to Democratic Gov. Jerry Brown’s desk. The bill passed among legislators in a 45-13 vote. It’s particularly significant under the presidency of Donald Trump, who has previously said Christians are the most oppressed group in America, and has promised to be the staunchest of allies to religious freedom advocates.

Few ever talk about how “religious freedom” laws that allow employers to fire or punish employees for not living according to their religious preferences seems more of a violation of religious freedom than the opposite.

“Women in this country have been fired for getting pregnant while unmarried, for using in-vitro fertilization and for other personal reasons related to their own reproductive health,” Democratic State Assembly Rep. Lorena Gonzalez Fletcher, the bill’s sponsor, said in a statement regarding the proposed legislation. “No woman should ever lose a job for exercising her right to decide when, how, or whether to have a family.”