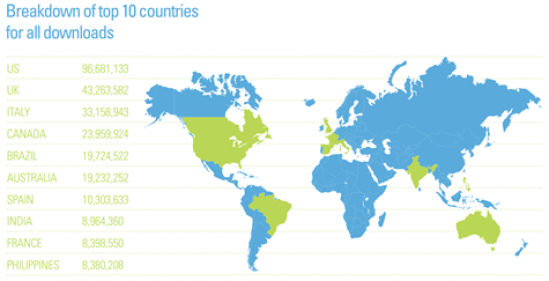 If you, for some reason, thought music piracy was just a fad that bit the dust with Napster and KaZaA, don’t you worry. Music trend analytics company Musicmetric has released an analysis of the digital music scene, dubbed the Digital Music Index, that highlights the trends of music consumers around the world. It turns out everyone torrents music, regardless of the multiple new legit delivery methods available to us in modern times — such as Pandora, Spotify, or iTunes — but the real question is not if people torrent music, but which countries are at the top of the torrent chain, and which artists sit atop those chains.

Though the entirety of the DMI report spans 2011 to 2012, the torrenting aspect covers the first six months of 2012. Unsurprisingly, the United States sits pretty atop the torrenting mountain, accounting for 96.6 million music downloads, with the United Kingdom following with 43.2 million downloads, and Italy coming in third with 33.1 million downloads. Canada, Brazil, Australia, Spain, India, France, and the Philippines round out the list in that order; their exact numbers contained in the above chart.

Perhaps more interestingly than which countries torrent music the most, Musicmetric’s report notes which artist is torrented the most in which countries. Ready to be proud of your respective country, everyone? In the United States, Drake is the most torrented artist, while Ed Sheeran is the most torrented artist in the United Kingdom. Italy and Canada are into Laura Pausini and Kayne West respectively, while Brazil, rounding out the top five most music torrenting countries on the list, digs dubstep artist Billy Van. Though Billy Van doesn’t sit atop the top four most music torrenting countries’ lists, the artist is actually the most downloaded across the top twenty countries. Billy Van set up a deal with BitTorrent Inc. to distribute his album via the torrent network, so he has a bit of help getting his work out there.

Interestingly, though unfortunately for the artist, Ed Sheeran, the United Kingdom’s music torrenting obsession, has sold 1.2 million albums, but that pales in comparison to the 8 million downloads of said album. The lesson here? As long as piracy is easy enough, people will pirate things. Plain and simple. Sometimes, though, it’s interesting to get a look at actual metrics, and feel badly for the artists afterward.