Researchers Show Just How Easy It Is to Locate Torrent Seeders 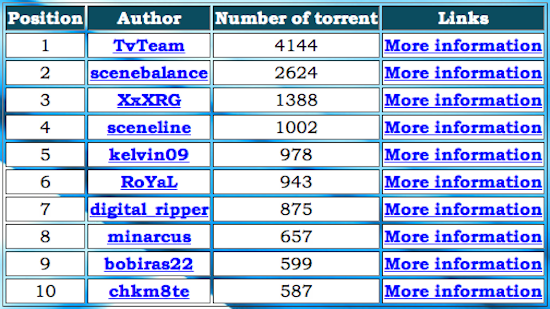 Anyone who forgets to set their DVR or doesn’t have cable will probably lament that, man, there are a lot of fake torrents out there. From uploaders trying to infect unsuspecting users with malware, to griefers just trying to entertain themselves by fooling others, a lot of torrents aren’t what they say they are. A team of researchers from Universidad Carlos III and Institute IMDEA Networks created a tool to track the seeders on The Pirate Bay to investigate the fake torrent issue. However, the tool they created shows just how easy it is to gather information on the people behind the torrents when all you have is the torrent itself.

The tool is a little rough around the edges when it comes to aesthetics, but it gets the job done, and is available to the public as we speak. It provides more than enough information to scare off torrenters that don’t make an effort to hide their info, including how many torrents they’ve uploaded, and where they’re located. If I uploaded some illegal material, I certainly wouldn’t want even the hemisphere of the country in which I uploaded it from to be available to anyone.

The tool can even look up individual Pirate Bay accounts, and provide more information that one would probably want known about oneself, such as which ISPs are attached to which account name, in which country the account is located, and even its IP address. It’s a little eerie that someone can just make a quick-and-dirty tool to mine and display all that data with ease.

The research team, thankfully, claims this is only in the name of research, but if for some reason copyright holders haven’t thought of this idea just yet, it’s now out in the wild, easily usable.

Some of the team’s findings are fascinating if you’re into the torrent scene. Some popular accounts were found to have thousands of IP addresses attached to them, while some other popular uploaders only have one IP address, signaling that pretty much one fella is doing all the heavy lifting.

The tool also shows that, a little unsurprisingly, the country with the most initial uploaders is the United States, followed by, surprisingly, Canada. The United States also sits atop the list of the most used Internet service provides involved with Pirate Bay torrents. Interestingly, the Dutch University of Tilburg is ranked ninth, behind eight ISPs.

Also of note, the top torrent uploaders are television related, as popular television torrenters TvTeam and scenebalance are the top two torrent publishers. This makes sense, as individual TV episodes release (and are thus torrented) much more frequently than individual games or software.

Go play around with the tool, but if you participate in the torrent scene, whether it’s questionable participation or not, be aware that it’s not even remotely difficult for someone to extract a bunch of information about yourself simply from you downloading and initiating a torrent.