Has Apple Lifted Their Ban on BitTorrent Apps? 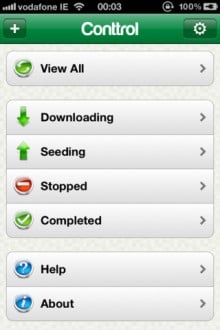 Apple has never seemed to be a fan of torrent apps. Back in 2010, reports began flying around the Internet that Apple approved a torrent app for their App Store. However, as quickly as it was approved, reports immediately followed that Apple booted the app from the store, enacting a ban on all torrent apps. Today, it turns out that two torrent apps have been made available on the Apple App Store. At the time of writing, they’re still available, so does that mean Apple has lifted their App Store ban of torrent apps, thus joining the world as a somewhat normal computer company in 2012?

Now, it’s worth noting that the two torrent apps that are available aren’t torrent clients that will allow one to directly download torrents to their mobile device. Conttrol, with a price tag of $3.99, allows the user to remotely monitor their uTorrent program running on their computer, as well as begin downloading a torrent via URL submission. Obviously, downloading a large torrent file directly to an iPhone or iPad would use an enormous amount of over-the-air data, as well as take up a large chunk of precious storage space on a device that doesn’t quite provide enough storage space to be a primary torrenting device. So, being able to remotely control one’s main torrenting platform is fairly convenient, and Conttrol allows for that without having to deal with setting up a static DNS server and a remote desktop app.

The other torrent app that has survived the App Store, Transmission RPC, is similar to Conttrol, in that it allows the user to remotely control their Transmission desktop client. Transmission RPC has actually been available on the App Store for a couple of months, but Conttrol was added about one week ago. Both are still available, and have not been removed as swiftly as Apple has removed torrent apps in the past. Does this mean Apple is finally lightening up on the torrent scene? Not necessarily.

Though Transmission RPC and Conttrol have seemed to survive an Apple purge, neither app actually allows one to download torrents directly to the iOS device, but rather, acts as a remote control for a torrent program located elsewhere. Apple also doesn’t prevent torrent programs from working on their desktop operating systems, as a large portion of people with a Mac desktop or laptop is already aware, thanks to sleek, lightweight OS X torrent clients like uTorrent. So, it could be that Apple has approved these two torrent apps because neither of them actually download a torrent directly to one of Apple’s mobile devices, or it’s entirely possible that Apple has finally admitted that though torrents tend to be used for nefarious purposes, they’re also a legitimate, useful file transfer protocol.

If Apple hasn’t lifted the ban on torrent-related apps, we’ll certainly find out if Conttrol and Transmission RPC get removed anytime soon. Considering Transmission RPC has been available on the App Store for a couple of months, and Conttrol has survived for a little over a week already, we can only hope Apple has lightened up and realized the power of torrents can also be harnessed for good, and not just to illegally download the latest episode of Boardwalk Empire.