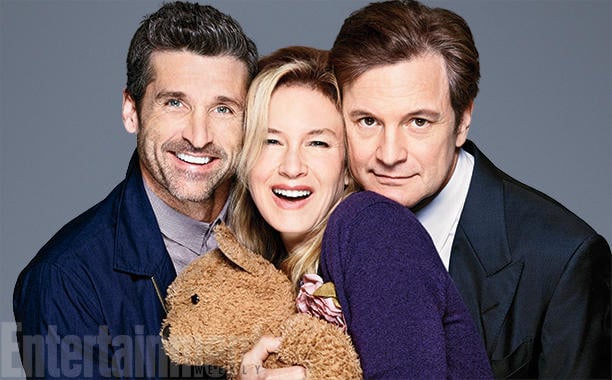 Yesterday, Variety published an extraordinarily ill-conceived think piece about Renee Zellweger’s face, specifically her face as it appears in the new trailer for Bridget Jones’s Baby. (You can check out said face above, in a promo image for Entertainment Weekly. If, like Variety, you find Zellweger’s face to be unrecognizable, just know that she’s the human face in the middle of the other two faces.)

I suspect that someone at Variety knew this piece was hot, inflammatory garbage, even if the author himself only had the best of intentions, and that Variety published it regardless because they know that hot, inflammatory garbage can be great for traffic. I don’t want to validate that decision by linking to the article here, but I’m still writing about it because I think it’s important to critically examine the beliefs expressed in the Truly Bad Take. Unfortunately, Variety critic Owen Gleiberman is certainly not alone in feeling the way he does about Renee Zellweger’s face, and the faces and bodies of other women.

The article is titled “Renee Zellweger: If She No Longer Looks Like Herself, Has She Become a Different Actress?,” which gives us a lot to parse right off the top. Since Zellweger still fundamentally looks like herself—this isn’t Face/Off—a less-misleading question to ask might be, ‘does society place such disproportionate value in women’s looks that, in altering her appearance slightly, a woman is believed to also alter her professional worth?’ Given how notoriously terrible Hollywood is at valuing women beyond their physical attributes, the answer to that second question would probably be yes.

Unfortunately, Gleiberman’s article doesn’t interrogate or even really mention Hollywood’s reductive attitude towards women, and instead criticizes Zellweger herself for possibly having had extensive cosmetic surgery prior to Bridget Jones’ Baby. Gleiberman answers the question in his own title with a resounding ‘yes,’ and doesn’t stop to wonder what that ‘yes’ says about sexism in the industry or his own biases. In fact, sexism, Hollywood misogyny, and ageism aren’t mentioned once in his argument, which, for a think-piece bemoaning an actress possibly having had cosmetic surgery, is a staggering amount of context to leave out.

It’s a ritual of our vanity-fueled image culture. You go to see a movie that features an actress or actor — in most cases it’s an actress — you know well, and somehow she looks…different. Her nose is thinner, or her lips are fuller, or her lips are thinner and her cheeks are bolder, or her forehead is younger, or maybe you can’t even quite put your finger on what the difference is, but you know it’s there. Like everyone else, I’ve had this experience and then followed it with a makeshift seminar of perusing photographs on the Internet, scouring them for the before-and-after truth, which always comes down to one question: Did she or didn’t she?

I don’t know about the ‘everyone else,’ mentioned here, but I have never been so hung up on what other women do to their bodies that I need to play Cosmetic Surgery Internet Detective. Gleiberman goes on to say that the reason he’s personally so invested in Zellweger’s face is that, by allegedly changing an aspect of her body, she has stolen a part of him: “Watching the trailer, I didn’t stare at the actress and think: She doesn’t look like Renée Zellweger. I thought: She doesn’t look like Bridget Jones! Oddly, that made it matter more. Celebrities, like anyone else, have the right to look however they want, but the characters they play become part of us. I suddenly felt like something had been taken away.”

I might feel differently about this particular point had the article been written by a woman instead of a man, but I think it’s inherently objectionable for a male critic to say that, in making a decision about her own body, a woman has taken something away from him. Men will arbitrarily criticize every cosmetic decision a woman makes, without realizing that women often make those decisions without men in mind; just because Renee Zellweger is famous doesn’t make her more beholden to the male peanut gallery.

Gleiberman argues that Zellweger’s value has always been in her achievable, girl-next-door looks, saying of her breakout role in Jerry Maguire that she used to be “beautiful in the way an ordinary person is.” Obviously, the Bridget Jones character was and is in many ways a heightening of that ordinariness, an amalgamation of all the neuroses and anxieties “ordinary” women presumably experience (I’m extremely bummed to report that should-I-pick-Colin-Firth-or-Hugh-Grant is not as relatable a struggle as Bridget Jones believes it to be).

It’s worth pointing out, in discussing Zellweger’s ‘ordinary’ looks, that she had to gain weight rapidly for the first two Bridget Jones movies, and then quickly lose those additional pounds for subsequent roles. The ‘ordinary’ Bridget Jones that Lieberman feels so entitled to has a physicality that Zellweger has had to force her body to achieve in the past.

What Lieberman misses here is that women’s bodies, even famous women’s bodies, do not exist to please men. They do not exist to make men comfortable, or, to borrow from Jerry Maguire, to complete them. It’s hard for me to imagine Variety publishing an article about a male actor which argues said actor’s worth is intrinsically tied up in their ‘ordinary’ looks, or in their looks at all—actors like Zellweger’s Jerry Maguire co-star Tom Cruise might have their appearance discussed as an aspect of their career, but certainly not the defining aspect.

The article goes on to distinguish between the subtle cosmetic tune-ups that most people in Hollywood have likely had, and cosmetic surgery that leaves someone “no longer look[ing] like who they are.” Lieberman argues drastic changes like that are “not necessarily the result of bad cosmetic surgery. It’s the result of a decision, an ideology, a rejection of the self.” He ties that “rejection of the self” into a discussion of the recent Nina Simone biopic Nina, which starred Zoe Saldana as the titular singer, wearing dark makeup and a prosthetic nose.

Glieberman argues that Nina producers gave the singer “plastic surgery in hindsight” by casting a lighter-skinned, conventionally attractive woman in the role. Although I agree with that to a degree, I think it’s dangerous to argue that Renee Zellweger electing to possibly have cosmetic surgery is at all comparable to the producers of Nina casting a woman who doesn’t look like Nina Simone. Renee Zellweger can make her own decisions about her body; Nina Simone, having passed away over a decade ago, couldn’t consent to that metaphorical “plastic surgery.” The former was a woman taking control of her own physical narrative, the latter was decidedly not.

I think Glieberman’s piece sprung from a well-meaning if patronizing place of “ladies! You don’t need all the makeup/trappings/plastic surgery to be beautiful.” But you can’t make an empty assertion like that when discussing Hollywood without also examining the industry’s ageism, sexism, and gendered double standards.

That’s also not to say that I think Zellweger’s face was necessarily motivated by any of those pressures—perhaps she just prefers the way it looks now, and that’s okay, its her face! Regardless, it’s not okay to start a conversation about cosmetic standards in Hollywood that focuses on an individual actress while ignoring systemic pressures, and manages to make a discussion of a woman’s body about a male critic’s comfort. That’s not the nuanced, responsible reporting I expect from Variety.