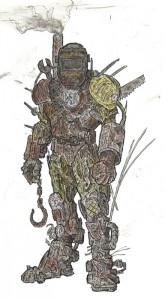 The economic crisis bites. Flinton, MI, was built on industry, and the industry’s gone, since by far the city’s dominant company took the stimulus cheque, attacked wages, outsourced more and more, then finally all, R&D and production overseas. Flinton, like so many other towns, is dying.

Dan knows how to fight, but that isn’t enough. They put controls in the suit connected to a central hub in Flinton, into which they can log, so Dan will be in constant touch with the others, who can take control of different aspects of the system as necessary: so the other scrappers can help fight, the veteran who was once a sniper can aim the weapons, the one with a pilot’s licence can fly it, the techie can patch into data systems, and so on, and they can all strategise together. A single-bodied union. A collective superhero.

— Whether or not author China Miéville actually submitted this pitch to Marvel or not remains unseen, but we don’t much care because it’s still damn cool. Read the whole thing, enjoy the ending.