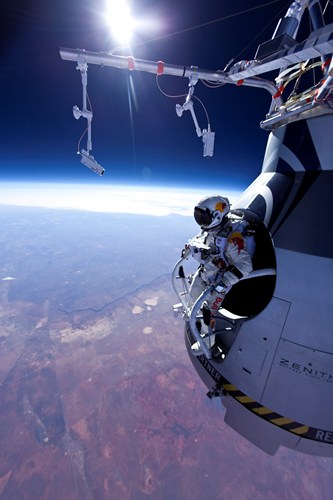 The Internet has been lately awash with videos of people strapping interesting objects to weather balloons for the purpose of filming them at the edge of space. It’s fun to watch, but Austrian skydiver Felix Baumgartner decided that he wanted to go along for the ride and parachute down. His plan, branded as Red Bull Stratos, is to eventually jump from 120,000 feet up this summer. This past Thursday, he took his first leap in a practice jump from an astounding 71,581 feet.

To reach this outrageous height, Baumgartner rode aloft in specially made, pressurized capsule attached to a helium-filled balloon. At 71,000 feet, Baumgartner is far above the Armstrong Line — the point at which it is impossible to survive a jump without oxygen and a pressure suit. What’s more, he’s jumping from an extremely cold region of the atmosphere, where temperatures usually hang around -94F degrees.

Advising Baumgartner on the project is legendary skydiver Joseph Kittinger, a retired Air Force colonel who in 1960 set records for longest freefall, highest skydive, and fastest speed achieved by a human being without a vehicle as part of Project Excelsior. When Baumgartner makes his 120,000 foot jump, he’s certain to break all those records and may even break the sound barrier.

Until that jump, we’ll just have to content ourselves with the astounding pictures from Baumgartner’s practice jump. Oh, and this video, too.