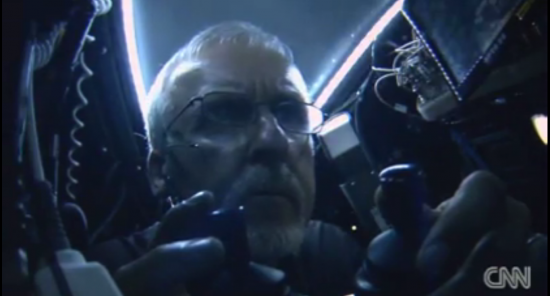 Director of films with one word titles like as Titanic and Avatar, James Cameron is aiming to accomplish something noteworthy that doesn’t involve an Oscar, actors, or even vaguely cat-lookin’ aliens; he’s going to venture to the ocean’s deepest depths. And maybe, just maybe, he’ll find some aliens. The glowing purple and pink kind, not the cat-lookin’ ones. The spot he’s trying to reach, appropriately named Challenger Deep, is part of the Mariana Trench in the Pacific and the deepest known point in the world’s oceans.

How does he plan to get that deep? Well, it turns out that he has a secret high-tech one-man sub that might be up to the task. He and his team have been plotting the journey for over 5 years now, and as Cameron has begun training in his cramped little submersible, he’s been letting some of the information about his plan leak out.

We don’t know too much about his sub at this point, but there are a few impressive statistics that have been released. The sub, equipped with a set of robotic arms and special cameras, has the ability to shoot downward to the sea floor at speeds of 500-700 feet per minute, withstanding pressures up to 16,000 pounds per square inch. As you might expect, the sub is mighty cramped, but Cameron, who finds the sea floor facinating (as you might have been able to guess) finds the cramping worth it.

“It’s so exciting – every second you see something cool or you’ve got something to do or you’re photographing or you see some amazing fish,” Cameron told CNN while giving them a tour of his cutting edge toy. “You know, there’s so much we don’t know. I’m hopeful that we’ll be able to study the ocean before we destroy it.” He’s not the only one trying to “get deep,” as it were. Virgin playboy billionaire Richard Branson is also taking a stab at it, as is experienced sub pilot Patrick Lahey. Cameron, however, seems to be the front-runner for the moment.

How deep is Challenger Deep exactly? Challengingly deep, as it turns out. Its very pit is a whopping 35,814 feet down, making it an inverted Mount Everest plus an extra 6,785 feet. The greater Marina Trench, of which Challenger Deep is a part, has only had two previous human visitors; this is very uncharted territory.

That being the case, it’s not exactly suprising that there’s a prize out there for pulling off the challenge. The X-prize foundation, which is also offering a $20 million prize for someone who can successfully “rove” on the moon and a $10 million prize for anyone who can build a device that can sequence 100 human genomes within 10 days or less, is offering a cool $10 mil to the first explorer who makes it to the Deep (and back presumably). Cameron, however, has stated he has no particular interest in this prize. He probably doesn’t need the cash.

Finishing up a series of test dives, Cameron plans to make the real dive later this month. What he may find down there is anyone’s guess, but chances are it will be pretty cool. After he pulls this off, it’s probably back to making movies for a little while; he’s got two sequels to Avatar that he needs to knock out. Who wants to bet one of them is going to have a righteous underwater scene?