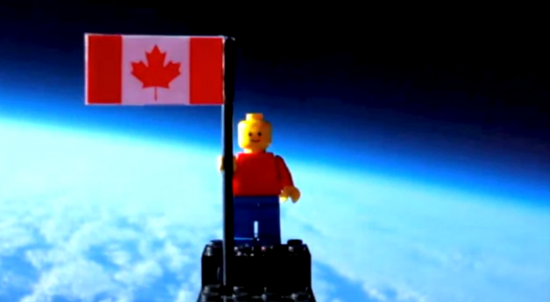 When I was a kid, a friend of mine and I decided to build a raft out of Popsicle sticks and glue a LEGO guy to it. Then we set it free in a nearby creek. It was awesome. Now, many years later, two Canadian teenagers did basically the same thing, except they sent their LEGO minifig into the far reaches of the Earth’s atmosphere using only equipment found on Craigslist. To boot, they filmed the whole journey, POV-style. My Popsicle stick raft is suddenly even lamer than it was to begin with.

The pair, Mathew Ho and Asad Muhammad, both 17, started the project about 4 months ago, working on it each Saturday, figuring out their plan of attack, collecting equipment, and even stitching their own parachute. After getting everything planned out and assembled, the pair had spent about $400, the price of which includes the cameras used to document the incredible journey of the Canadian-flag wielding LEGO man.

Affixed to a helium weather balloon, the minifig and cameras reached the staggering height of 80,000 feet, or about 15 miles, double the altitude of your standard commercial jet. Keen on retriving their little project, the pair also included a GPS receiver on the rig, and were ultimately able find it where it landed, some 75 miles away from the launch point.

In addition to the prestige of having accomplished such a project at such a young age and getting an excellent bullet point to throw on college applications or résumés, the two also have a stunning little film showing the ascent of their project into where the farthest reaches of the atmosphere meet the closest reaches of space. Not a bad haul for an extracurricular project. Definitely better than the mass of wet Popsicle stick I wound up with.

(Toronto Star via The Guardian)