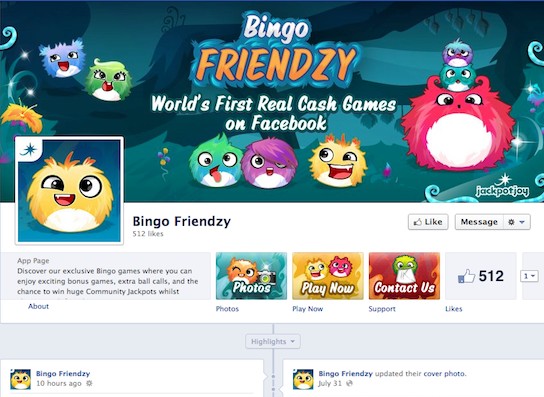 Plenty of us waste good chunks of our days whiling away the precious hours of our lives on Facebook. Sometimes, seeing how fat your ex has gotten and wishing a guy you knew for like ten minutes in college happy birthday doesn’t feel like a fulfilling way to spend your day. Sometimes, you want to do that stuff while you’re also shoveling piles of cash into a deep hole. The sage folks at Facebook are aware of this, and in a stroke of genius, have given the go-ahead the to the app Bingo Friendzy — Facebook’s first toe into the chilly ocean of real money gambling.This isn’t cause for celebration for degenerate gamblers around the world quite yet. Initially, the service will only be available in the United Kingdom, where online gambling is popular and scrupulously regulated — Gibraltar-based developer GameSys already provides support for U.K. gambling sites, such as Fabulous Bingo. Tellingly, the site will avoid Facebook’s languishing Credits payment system. Instead of trading real cash for digital currency, bingo players on the site will provide Bingo Friendzy with their bank account information and make a deposit with the site to start playing. Which is a fine plan, as long as you don’t mind handing your banking details to an entity called Bingo Friendzy.

Gamesys isn’t the only one looking to tap the market for Facebook gambling — Zynga is looking to enter the fray as well, hoping to have gambling operations up and running in the U.K. next year.