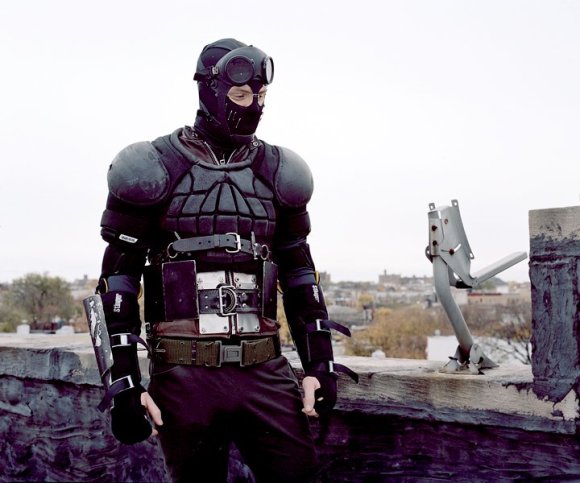 If you’ve been following the news lately (maybe only in the New York area), you might have heard about the Long Island Serial Killer who has been killing sex workers who advertise on Craig’s List. Human remains have been found on Long Island beaches, and up to 10 women appear to have been murdered by this killer. Predictably and sadly, not everyone has a lot of sympathy for these women because of the line of work they’ve chosen, and some believe that the cops aren’t taking the case very seriously. A group of real-life superheroes in New York, calling themselves the New York Initiative, think that’s wrong, and they are out to teach potential victims how to protect themselves and help find this killer.

The New York Initiative is made up of martial arts and weapons experts, none of whom are affiliated with law enforcement. They posted their own advertisement on Craig’s List recently, offering up what they believe the cops won’t: protection from becoming another victim.

The Long Island Killer is out there. He’s a scary bastard, and it’s starting to seem like he is focusing on you pretty ladies because some people are slower to report you missing, and also because apparently the law doesn’t respect your personal choices and that means cops are slower to follow through when it comes to you. Well, I’m here to say F*CK THAT. We respect you as human beings, we believe in personal freedoms and think that you’re doing something that is absolutely your choice to do.

So rock on, ladies…We are on your side. With that said, we are here to help.

In addition to offering martial arts and improvised weapons training for self-defense (free of charge), the NYI also provided advice on how women can better cover their bases when they are on the job. Sort of a “buddy system,” in which they inform a friend of where they’re going, when they’re leaving and expect to be back, and touching base with updates so everyone knows things are going as planned. The NYI also offers their own “log book” as well as a number to call when a date might become violent and/or dangerous. They promise to be on standby if assistance is needed. And despite their opinion of law enforcement, the NYI isn’t blind to what has to be done:

[W]e won’t involve law enforcement unless you are in serious danger. The logs will be kept personal and private, because what do the police need to know about your personal life, right? It’s just a date, for cryin’ out loud.

The NYI is not brand new, and they’ve even been featured in the documentary Superheros by Michael Barnett. Among their aliases are Dark Guardian, Blindside, and Skinner. They’re hoping this message will be spread far and wide so anyone who might need it will have the option for protection and education, and that eventually, this killer will be stopped.

(Top pic via NYI on Facebook, story via Tiny Nibbles, which is NSFW, but ultimately via Cindy)