"I know so many people, including myself, whose RPG characters were exploring queer romance or gender identity before they themselves were able to in real life." 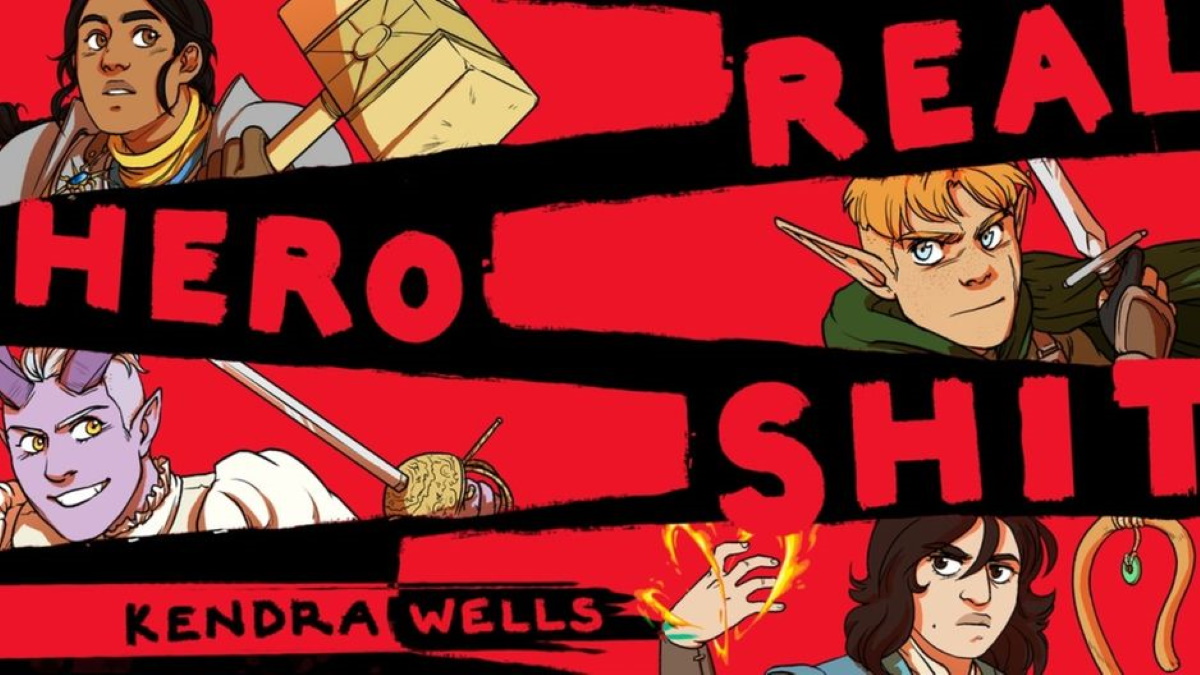 I don’t think Kendra Wells knows this (or maybe they do?), but their graphic novel Real Hero Shit illustrates how I would imagine my RPG adventures playing out. Queer romance routes were my go-to decision, and if they weren’t available, I’d quietly write the fic in my head. My team consisted of a gaggle of disaster gays (whether the game said so or not) and we’d work together to save the world, one revive spell at a time.

Real Hero Shit has a similar vibe, only the characters also understand the importance of looking cool while going on these adventures. Oh, and it’s unapologetically gay, so I don’t have to squint my eyes to read between the lines.

In Real Hero Shit, people are going missing in a small mountain town, and the city guards are blocked from a real investigation. The notorious Underguild has assigned Michel a secret mission: find the missing villagers and bring whatever kidnapped them to justice. Unfortunately for Michel and his fellow adventurers, Ani and Hocus, they’re short a fighter and need one more party member to foil this plot. Even more unfortunately, the only volunteer seems to be the arrogant, ostentatious, purple playboy Prince Eugene looking to cure his boredom.

Covert is not a concept that Prince Eugene is familiar with, and let’s just say his commitment to the mission is questionable. Every day is basically spring break for Eugene, but outside the palace walls he crashes into a hard reality: the system that kept him safe in his silk-sheeted bed isn’t particularly concerned with the well-being of anyone who isn’t him. Eugene will have to level-up his awareness if he means to be a real hero, and time is running short!

“I think RPGs are so popular, especially in the last couple of years when we’ve all been stuck inside because they allow us to exist outside of ourselves,” says Wells. “Sometimes people need a safe sandbox to explore different sides of themselves in ways that we might not be able to in our day-to-day. I know so many people, including myself, whose RPG characters were exploring queer romance or gender identity before they themselves were able to in real life. Even outside of gender and sexuality, it’s an incredible exercise in sympathetic emotional relations to be able to put yourself in the shoes of someone completely different than you and really sit with their motivations and experience. That kind of sympathy and empathy is what makes good art in my opinion.”

To celebrate the launch of the Kickstarter campaign, we have some exclusive pages from the graphic novel to share. The pages feature an exchange between Eugene and Hocus that focuses on gender, the playboy prince being educated on there being more genders than he thinks there are. 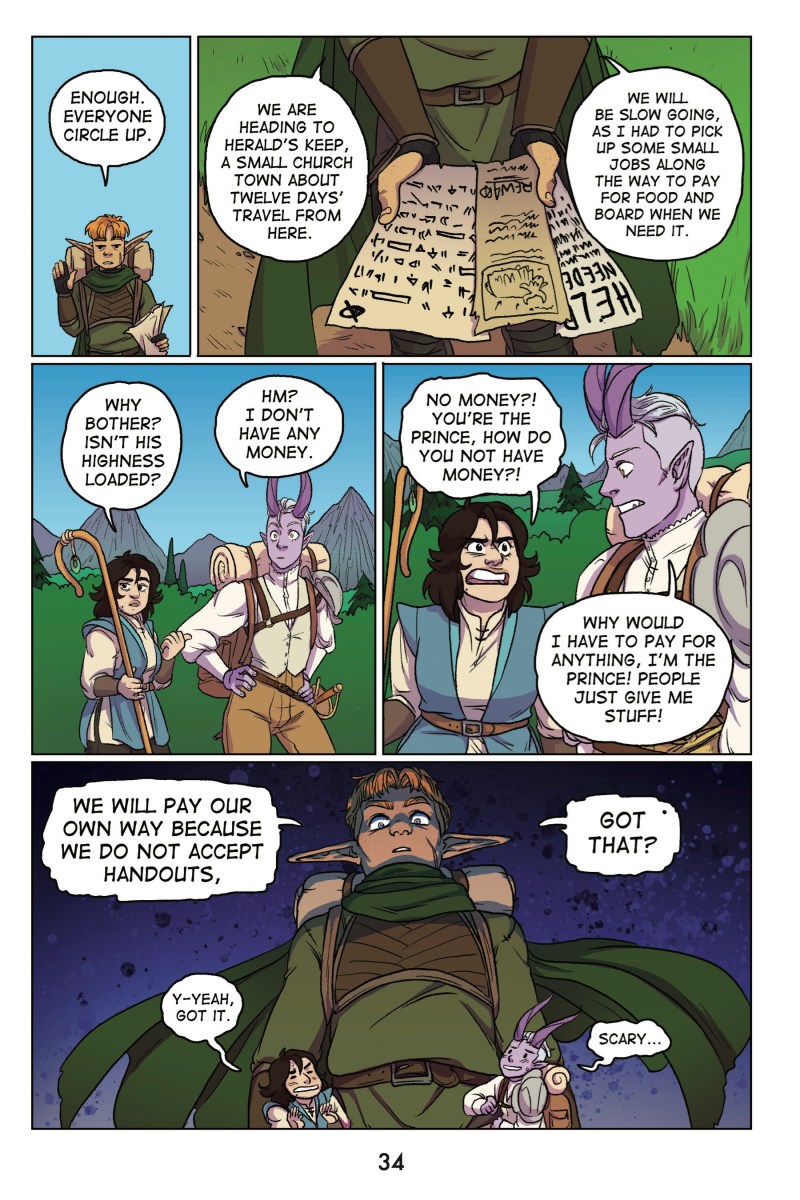 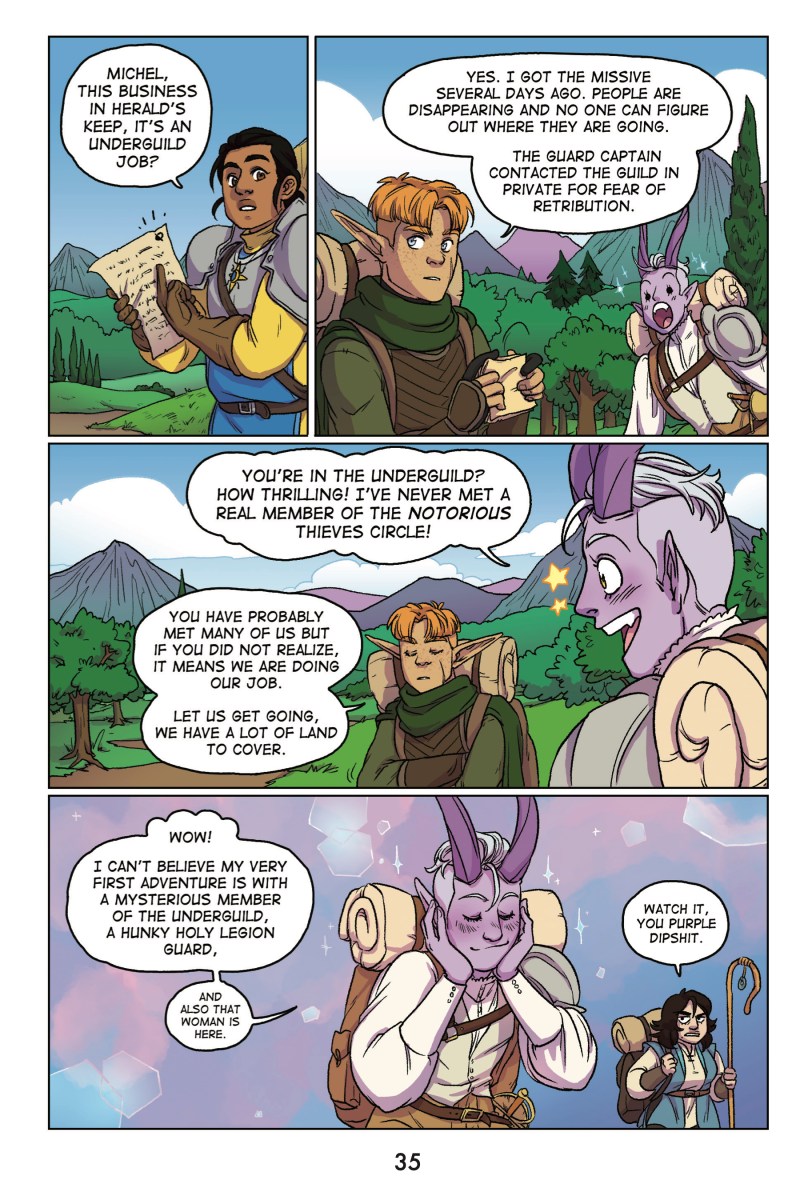 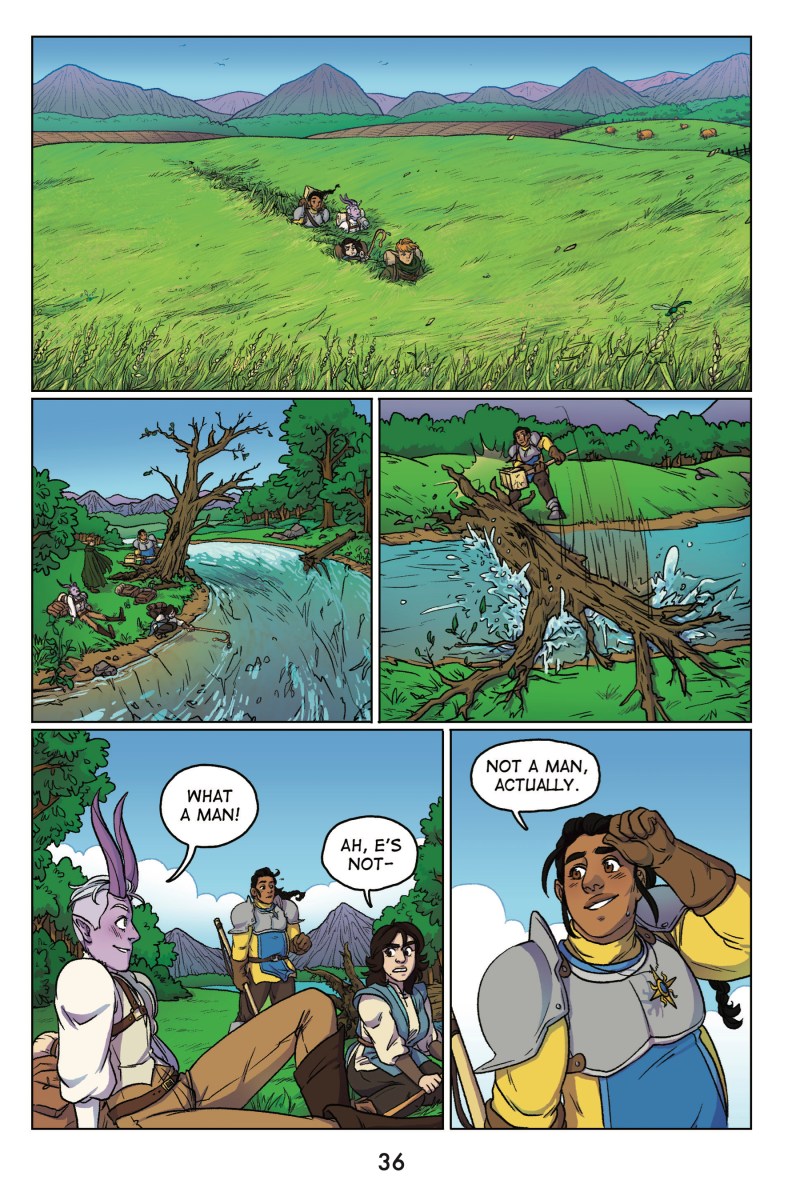 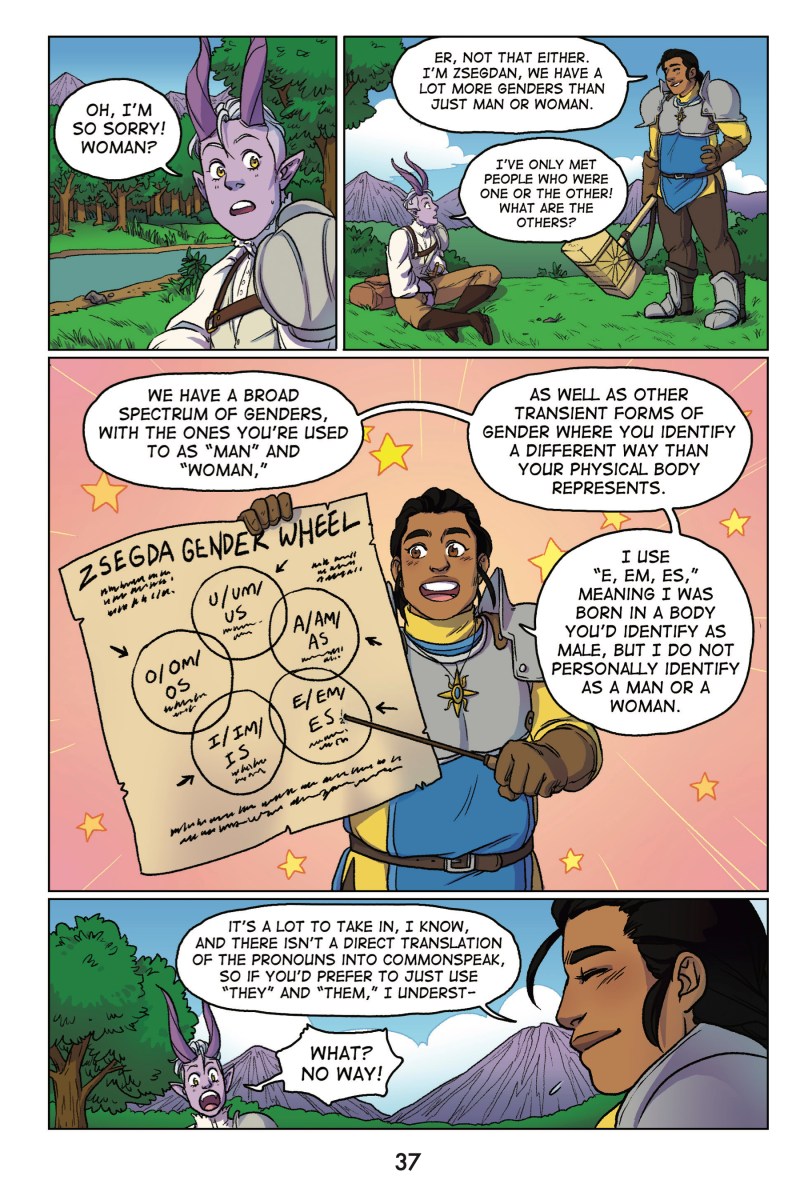 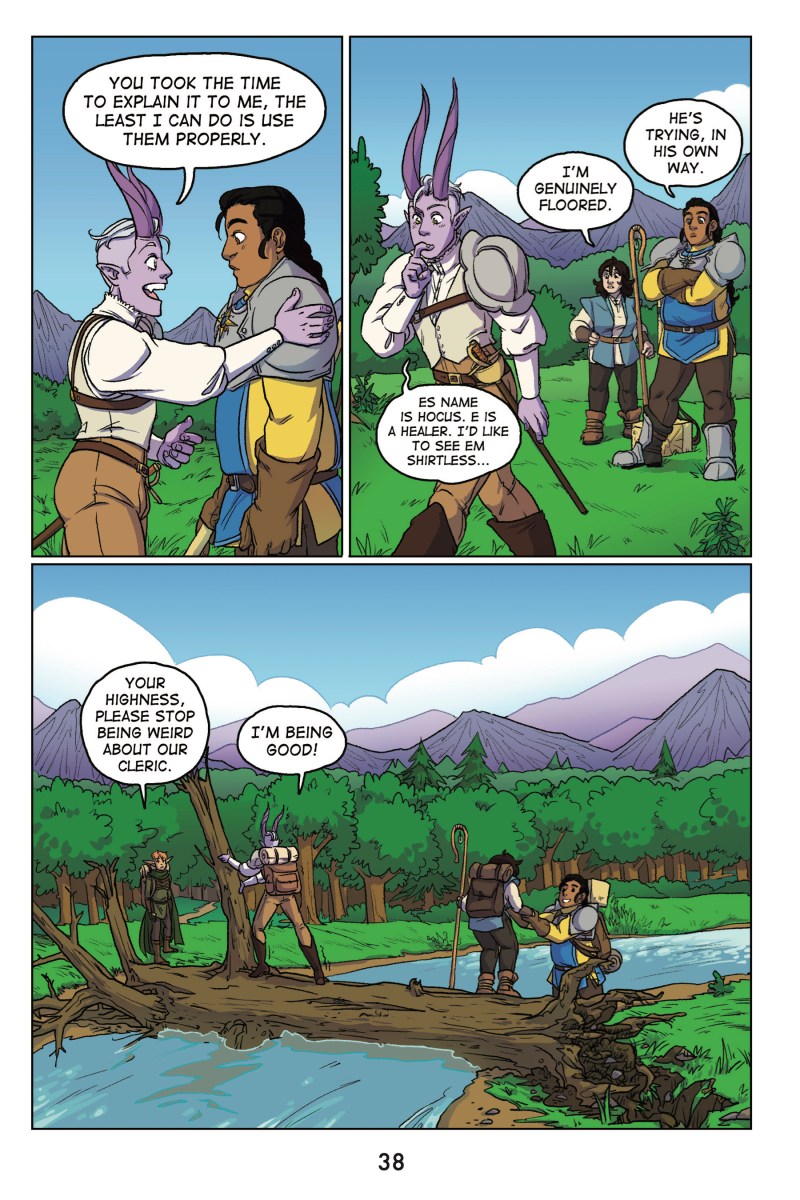 What I appreciate about this conversation between Eugene and Hocus is Eugene acknowledging the work Hocus put into explaining how gender works for the Zsegden and how that should be respected. If someone takes the time to explain their pronouns, the least we can do is try to use them. Instead of taking Hocus’ offer to just use they/them, Eugene decides to try and use e/em/es.

Not only does he use all three pronouns, but he also stays in character by wondering what Hocus would look like shirtless. Eugene is, apparently, a playboy who will use the correct pronouns which, yes, good, more of that, please.

“I love stories like Real Hero Shit because I always want more stories with queer characters that aren’t about being queer trauma,” says editor Kel McDonald “I want queer characters to have the adventures that can be as lighthearted and goofy as the ones straight guy characters have been getting for decades.”

The lighthearted tone is definitely there, along with Eugene’s flirtatious side. He might get his chance for shirtlessness and more if he plays his cards right, after all, this is a graphic novel intended for mature readers. “Sex-positivity has been in the Iron Circus mission statement, so of course, Real Hero Shit is right in our wheelhouse from the start,” says publisher Spike Trotman. “But even though we all knew how hilarious Kendra is, we just straight-up weren’t prepared for how goddamn FUNNY it is. I can’t wait for people to read this GN!”

You can check out the Kickstarter right over here! 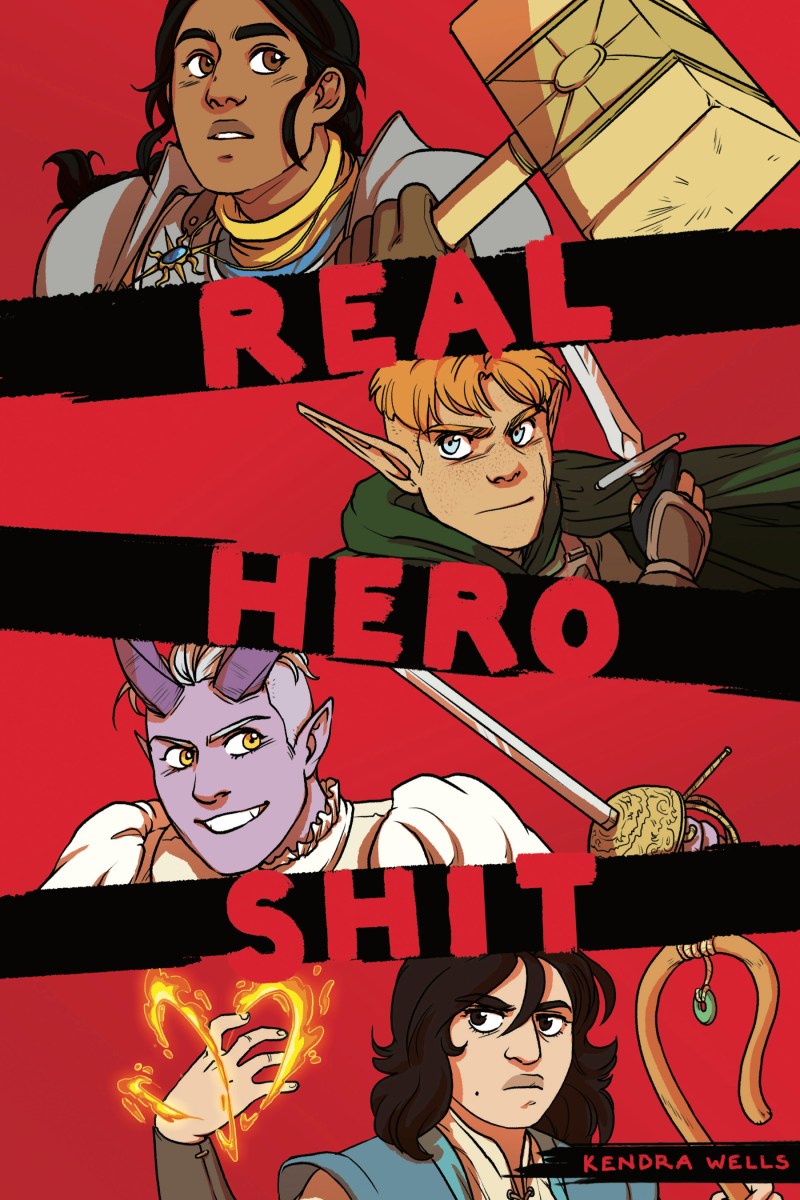