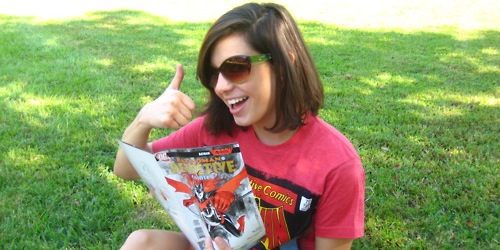 I’ve got quite a few things to do this evening, from making dinner, washing the rest of last week’s dishes, and hitting the gym for another round of my optimistically cosplay related workout routine of trying to get some definition in my arms before I dress up as a genderswapped version of Bane (which reminds me, I didn’t do my twenty-five pushups yesterday). But tomorrow…

Tomorrow I have a very specific task to complete: read a comic book in public. And you should seriously consider putting it on your to-do list as well, and maybe even sending us some pictures. Here’s why:

Read Comics in Public Day was started up in 2010 by Brian Heater and Sarah Morean of indie comics site The Daily Cross Hatch, as a day to celebrate literacy and the legitimacy of comics as an artform. It was supposed to be a day when, on the date of the late Jack Kirby‘s birthday, comic book fans could take the individual and usually private act of comic book reading out into the world and make certain that they got seen by complete strangers. The idea was to push against the notion that comics aren’t popular or are only read by kids; that they’re not just bought to be cased in plastic and kept in a cardboard box in the basement of the ponytailed guy from The Simpsons; that they’re not just for founding multi-million dollar movie franchises on. They actually can be enjoyed for their content by ordinary people.

Now, I know many of you already read comics in public. I certainly do, mostly on the bus back from my comic store, New York City’s Forbidden Planet. But, frankly, you should never say no to another excuse to do something you love, especially as an expression of solidarity between you and other likeminded individuals.

But for a lot of the folks who comprise our regular readership, Read Comics in Public Day hides another equally worthy cause. It’s not just an opportunity to show strangers that comics are read, but to show the comics industry who comics are read by. To show the Big Two who is willing to take time out of their day to participate in a communal effort to make their product more visible to folks who might be interested, and to show them that it’s a much wider group than the young, straight, male demographic they’re desperately pursing. DC Women Kicking Ass will be collecting evidence for this sister celebration Women Read Comics in Public Day, and we at The Mary Sue certainly wouldn’t say no if you wanted to tweet, Facebook message, or otherwise connect us to photos of you, our dear readers, reading some comics under the all seeing eye of the flame orb, or whatever public space is available to you.

Of course, now the only question is “What to read?” and to that end, might I personally suggest a few recent New 52 collections like Batgirl Vol. 1: The Darkest Reflection, Batwoman Vol. 1: Hydrology, or Demon Knights Vol. 1: Seven Against the Dark. If hard copies ain’t quite your thing, for one reason or another, I can also unequivocally recommend that you read Brian K. Vaughn and Fiona Staples‘ Saga, available on Comixology with the first issue going for exactly zero dollars. Another brilliantly begun series that’s too young to have made it to a trade collection is Kelly Sue Deconnick‘s Captain Marvel, which has only two issues out so far, but has also been featured in a couple of great issues of Avenging Spider-Man, #9 and #10.

Go forth and read, and strike a stance for comics legitimacy everywhere!