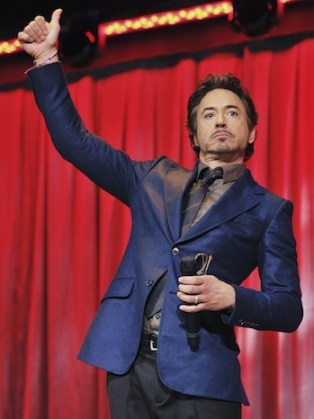 “How do we have it so she’s not going [whining], ‘Tony!’ and I’m going [growling], ‘Where’s Pepper?’… That’s the other thing that I have been pushing for. She’s in great shape, she’s really game. There’s all these genre movies and you have these capable women and they’re like, ‘Oh my god, some action is happening, I better step away or get caught in something over here.’ It’s like, ‘Really, is that where we’re at in the 21st century?'” – Iron Man actor Robert Downey Jr. speaking with Moviefone on how ridiculous it looks when women don’t get to be involved in the action.

He also mentioned he was the one who insisted on having Gwyneth Paltrow in The Avengers: “I was like, ‘You can’t just pretend that I got in a fight with Rhodey and Pepper’s out of town.’ They said, ‘You can’t have both of them,’ so I said, ‘All right, I need Pepper.’”