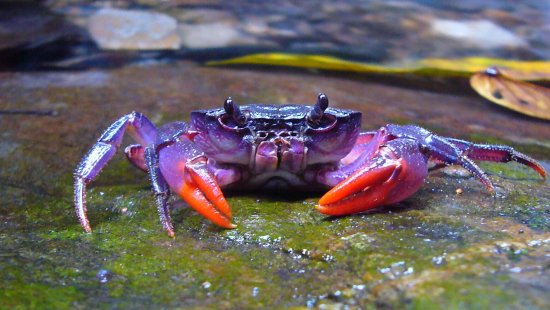 While this bright purple and red crab seems impossible to overlook, it was only recently identified by a research team led by German scientist Hendrik Freitag from the Senckenberg Natural History Museum. Beautiful as it is, this crab — Insulamon palawanense — lives only in remote regions of the Philippine island Palawan which makes its future quite uncertain.

In his work, Freitag revisited decades-old studies of freshwater crabs in the region and discovered four more species unknown to science. Insulamon palawanense is certainly amongst the showiest, but those colors probably serve a specific purpose. Speaking to the AFP, Freitag explained:

It is known that crabs can discriminate colours. Therefore, it seems likely that the colouration has a signal function for the social behaviour, e.g. mating […] This could explain why large males of various Insulamon species are more reddish compared to the generally violet females and immature males.

His team’s work was published in the most recent edition of Raffles Bulletin of Zoology.

Though colorful, Insulamon palawanense spends much of its time burrowing under rocks and eating decaying vegetable and fruit matter, as well as the occasional dead animal that it can lay its claws on. These behaviors, in addition to the remoteness of its home, likely contributed in the beautiful crabs remaining hidden for so long.

Being a freshwater crab on an island surrounded by salt water, Insulamon palawanense lacks a means to spread to new areas. Like the other new species found by Freitag and his team, they are only found on the island of Palawan. Freitag told the Senckenberg museum:

“We have proved that the only previously known type of Insulamon is restricted to the Calamian group of islands to the north of Palawan. The four newly discovered species live exclusively on the actual island of Palawan and make it a unique habitat[.]”

Their restricted habitat means that, according to Freitag, even the smallest changes in the environment could have enormous effects on the crabs — possibly driving them toward extinction. The presence of mining operations on the island could represent one such threat. Freitag, for his part, will continue his work identifying new creatures in the species rich area. Hopefully his efforts will lead to the protections the rare and beautiful animals of the region need.