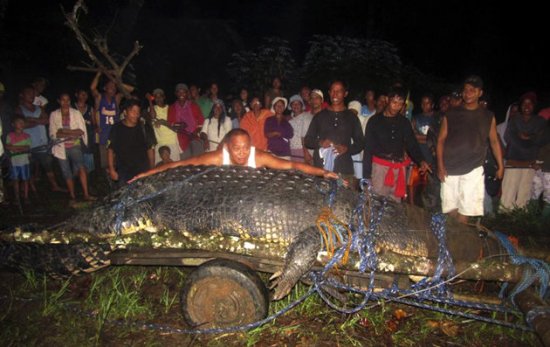 Villagers of the Bunawan township in the Agusan del Sur province captured a saltwater crocodile, weighing in at over one ton, along a creek after a three-week hunt. Mayor Edwin Cox Elorde said the crocodile was witnessed attacking and killing a water buffalo last month, and is also suspected of attacking a fisherman who went missing in July.

After a team of hunters saw the crocodile at a nearby creek, they set four traps, but the crocodile destroyed them, so the hunters replaced the destroyed traps with sturdier ones that employed the use of steel cables, which managed to ensnare the crocodile. The crocodile weighed in at 2,370 pounds, so around 100 people had to lug the fella from the creek to a clearing, where it was loaded onto a truck via a crane.

The crocodile was then transported to a fenced area where the town plans to build an ecotourism park showcasing the various species found in the marshland of Agusan. Mayor Elorde hopes the crocodile will become the biggest star of the park, citing that they may have turned a the hug reptile from a threat into an asset. That is, until a traitorous security expert shuts down the power of the park and the crocodile breaks free and shakes some Jell-O and eats a guy while he is on the toilet.