#IStandWithKrystina is now trending in support of Arielle. 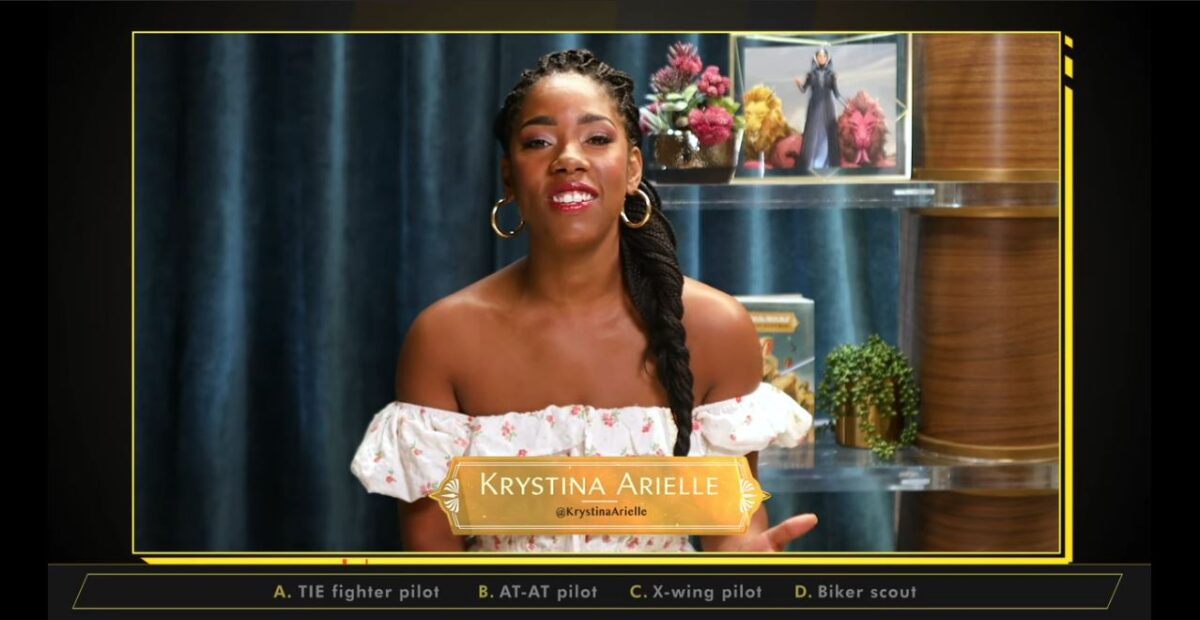 Y’all. My name is on Wookieepedia and the Star Wars: High Republic Show wiki. This makes it so real. A week from today this show premieres and I feel so overjoyed. Everyone at Lucasfilm has been so kind and so welcoming. I can’t wait to put this into the world. pic.twitter.com/c8BDfb21K4

But like all people of color who join the Star Wars universe, Arielle was subject to the targeted harassment from the fandom’s toxic racist contingency. Racist Star Wars trolls have been relentless in their attacks on franchise stars John Boyega and Kelly Marie Tran. And those same trolls are now directing their venomous hate at Arielle, focusing on some of her old tweets addressing systemic racism. Because in their broken brains, a Black woman calling out racist white systems and racist white people is (wait for it) racist?

The Star Wars Twitter account posted the following tweet which read, “Our Star Wars community is one of hope and inclusivity. We do not stand for bullying and racism. We support @KrystinaArielle”:

Our Star Wars community is one of hope and inclusivity. We do not stand for bullying and racism. We support @KrystinaArielle.

Arielle also received an outpouring of support from friends and fans from across the globe, as #IStandWithKrystina started trending:

Krystina is an ASSET to star wars & CANON on wookieepedia so racist comic book youtubers with no views need to sit down on their inflatable darth maul chairs and take a break #IStandWithKrystina #VerifyKrystinaArielle https://t.co/YFoVLTVWfi

Hi. @krystinaarielle rules. She’s a wonderful addition to the Star Wars family and I’m excited for her to be bringing us updates on all the very good High Republic news. Go say hi and give her a warm welcome today, would you? ♥️

There are few as bright, badass, and altogether wonderful as @KrystinaArielle, and anyone who tries to step into her ring better know we’re right there beside her.

.@KrystinaArielle is by far one of the nicest people we've ever met. She has been a continuous beacon of light in our community. We stand with her and can't wait to see her host her own Star Wars show! #IStandWithKrystina pic.twitter.com/9YvjYN1LAr

So @KrystinaArielle is one of the loveliest and kindest people I know. Always, #IStandWithKrystina.

If someone calls out racist white people and you feel attacked by that, it’s time to reevaluate what kind of person you are. #IStandWithKrystina

#IStandWithKrystina and any Black creative who dares to speak openly about systemic racism. (I also stand with the ones who don’t because a quick perusal at all the bullshit surrounding this confirms why a lot of folks – especially those within fandom – are hesitant to speak.)

Boyega had previously discussed how racism affected his Star Wars experience, saying “Nobody else in the cast had people saying they were going to boycott the movie because [they were in it]. Nobody else had the uproar and death threats sent to their Instagram DMs and social media, saying, ‘Black this and black that and you shouldn’t be a Stormtrooper.’ Nobody else had that experience. But yet people are surprised that I’m this way. That’s my frustration.”

Tran, who was bullied so severely she closed her social media accounts, wrote an op-ed in the New York Times where she wrote, “Their words reinforced a narrative I had heard my whole life: that I was “other,” that I didn’t belong, that I wasn’t good enough, simply because I wasn’t like them. And that feeling, I realize now, was, and is, shame, a shame for the things that made me different, a shame for the culture from which I came from. And to me, the most disappointing thing was that I felt it at all.”

star wars really said their community is one of hope and inclusivity…… i think the experiences of john boyega, naomi ackie, kelly marie tran and oscar isaac say otherwise. pic.twitter.com/97eD712nIw

It's about time they started speaking up on behalf of their People of Colour employees. Star Wars has been beyond lax when it comes speaking out against to racism, anti-Blackness, sexism and bigotry in the fandom.

Get Gina Carano out of there. https://t.co/Y1Ci2G3hIF

It’s good that The Powers That Be at Star Wars are speaking up in support of Arielle, but frankly it’s too little too late. Disney and Lucasfilm have not done nearly enough to protect their actors of color, even with some of their biggest stars going public about the company’s issues with systemic racism. It’s not enough for corporations to hire people of color: they need to stand by them and defend them with actively anti-racist policies. Anything else is just lip service.

We stand with Krystina Arielle.