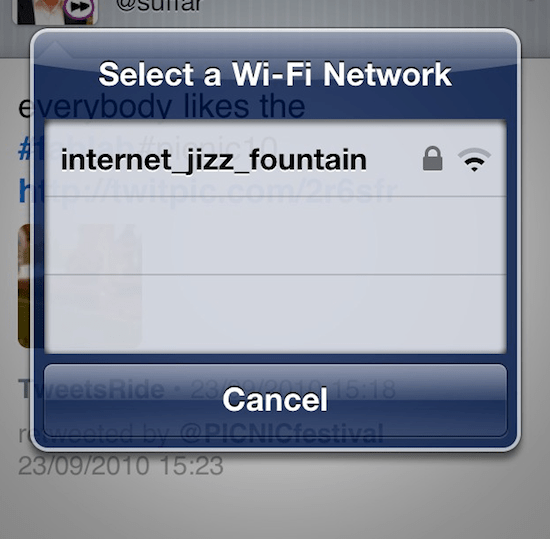 It’s not surprising that ridiculous and obscenely named Wi-Fi networks exist. In college, I could pick up such delightfully named networks as “assclown” and “boners firing into space.” However, it may surprise you to learn that a Wi-Fi network at the Teaneck, New Jersey Richard Rodda Community Center was so obscene that it set off a police investigation.

According to the New York Daily News, this particular network was named:

Frankly, I don’t think those blanks need to be filled in.

The network raised complaints, which led the police to trace the location of the network inside the community center. Teaneck police are currently looking into who named the network, and the Teaneck Mayor Mohammed Hameeduddin has promised, “We’re going to work hard to find out who did it.”

Some might argue that this is an unnecessary response to a Wi-Fi name. However, Wi-Fi networks are public pronouncements that often appear unbidden on people’s phones and computers. In my mind, it’s as if the words were written in enormous letters on a billboard, or shouted by someone standing nearby. In those situations, we’d almost certainly call this harassment. In fact, the woman quoted by the NY Daily News said:

“I was shocked, hurt. I felt harassed.”

Teaneck Police Chief Robert Wilson is quoted as saying that police are looking at situation as a possible bias crime. Unfortunately, considering that an unsecured wireless network can be renamed by any passerby probably means that no one person will carry the blame. I’d imagine it was just that: An enormous jerk who wanted to make trouble and will probably escape detection.

Hopefully, public spaces will keep their wireless networks locked down to prevent this kind of thing, but it would be far better if human beings could manage not to be crappy to each other. Both of these statements are, sadly, wishful thinking.

(via the New York Daily News, image via Ben Bashford is unrelated to the events described above)