Goblins have always been the losers of beauty contests in Peter Jackson‘s Middle Earth. Even the fanged Uruk-hai look handsome next to them, thanks to being bred partially from human stock.

And then torn out of rubber eggs covered in mud. But I digress.

A little while ago we got a peek at wood-elf King Thranduil (and what a glorious peek it was). That slightly grainy scan was recovered from an puzzle/activity book, published by Harper Collins Children’s Books, called The Hobbit: An Unexpected Journey. These new images of a slightly different sort of royalty are from the same source.

This picture matches a character description from yet another source, the descriptions on a series of The Hobbit tie in figurines. I’ll keep it behind a spoiler tag just in case, highlight to read:

“The Goblin King is a huge, grotesquely bloated monster that in the years of his tyrannical rule over the miserable inhabitants of the Goblin town grew fat and flabby. The Goblin town is a collection of skew-whiff ramshackle huts deep in the caves of the Misty Mountains. He commands a bunch of foul, polluted, with scars and ulcers studded goblins.

Basically, they are bandits, they live by what they can pick up from passengers on the passes through the mountains. The Goblin King and his followers manage to capture Bilbo and the dwarves. The Goblin King is more wily and smarter than it seems. He takes pleasure in torturing his prisoners — he almost succeeds to finish off Thorin Oakenshield and his companions.”

Thranduil’s character description in the activity book placed great store in his ability to throw a party, but not let any dwarves in, which is basically true, but also simply put in a way that has been made pretty funny. Doubtless there are some simplifications in this description as well.

Long time fansite the One-Ring.net brought up this shot from a Hobbit production video as relevant: 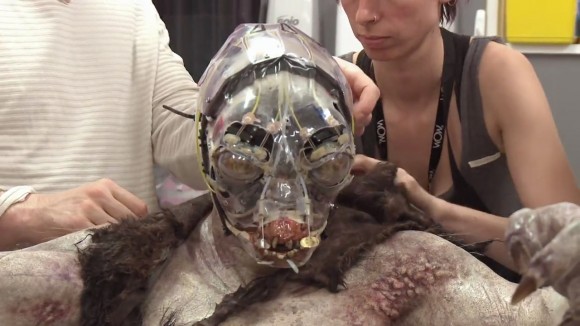 I’m not entirely convinced (seems like the head is planted too high on the shoulders), but comparing concept art from a kids book to unfinished costume work is not an exact science. In any case, what we’ve got here is some firm evidence for really disgusting looking goblins, who should be featuring quite prominently across all three Hobbit movies. Definitely something to balance out those pretty elves.