The Cake is Not a Lie, It’s a Resignation Letter 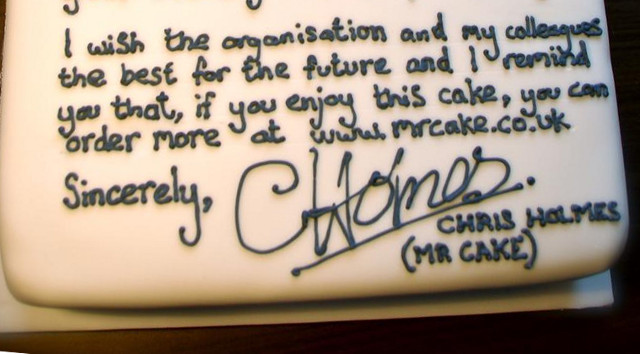 Most of us have probably quit jobs before. Sometimes the impulse to burn all bridges on your way out is too strong to ignore, but any career advice you’re likely to get will tell you to leave in a polite, cordial way. What’s more polite and cordial than handing in your resignation letter on a cake? Nothing.

There’s almost no better feeling than being able to quit a job you’re not passionate about for one that you love. That’s what Chris Holmes did when he resigned from his job at a British immigration office to pursue his dream. Holmes also goes by the name Mr. Cake, and, as you can probably guess, he’s a baker. I can’t attest to how the resignation cake tasted, but his cake lettering is nicer than my handwriting. Take a look at the full cake (and resignation letter): 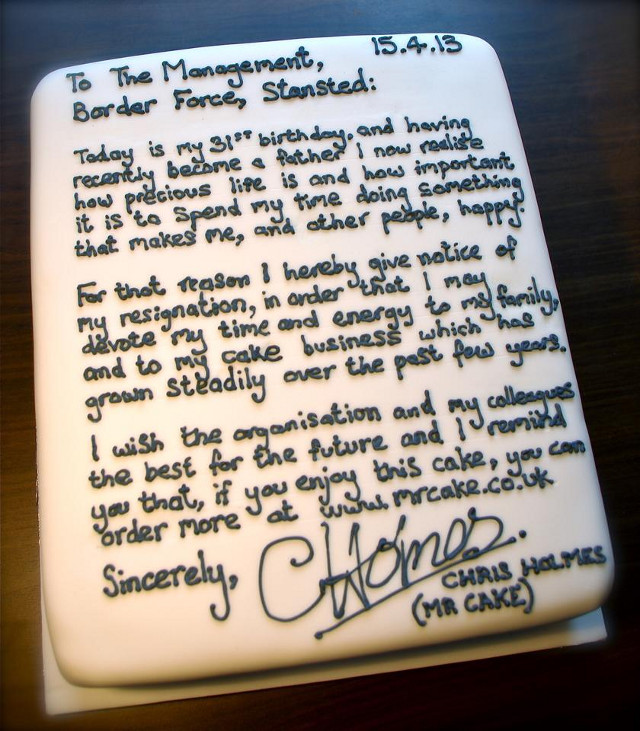 The resignation cake photo is being passed around Twitter and Reddit pretty heavily right now. It’s giving Mr. Cake great exposure, but it doesn’t look like his website was prepared for the added attention. I tried looking at his site for other cakes he’s done, but kept hitting service errors.

If you’re in the Cambridgeshire area where Mr. Cake runs his business from his small cottage kitchen, and are interested in checking out his wares, it might be best to wait a few days for the Internet to calm down.

Hopefully the added attention will lead to more business, because Mr. Cake recently posted this on Twitter:

Think it might be time to treat myself to a new oven. Just had to write the temperature scale on in permanent marker twitter.com/MrCakeUK/statu…

His cake lettering is even nicer than his marker-on-oven lettering.

I love it here at Geekosystem, but if I ever do leave I know who I’ll be calling to make my resignation cake.