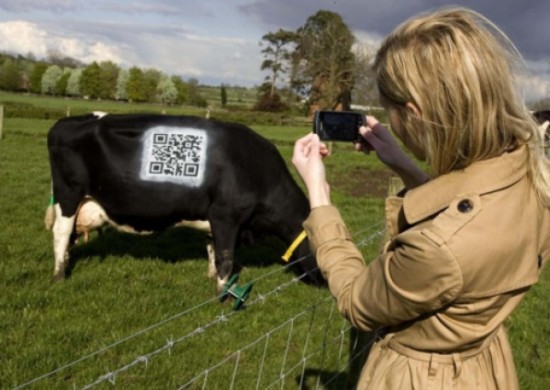 QR codes catch a lot of flak for being sort of awkward and hard to use. In fact, there’s a lot of evidence to suggest that the typically tech-savvy youth have little to no interest in them. Some farmers in Somerby, UK, however think they can spice up this technology and make it work for them. How might one do that, you ask? It’s easy; you just spray-paint your QR codes on a cow.

Jane Barnes and her husband Mark, in an attempt to raise awareness about dairy farming, have adorned a cow by the name of Lady Shamrock with a QR code. The code links back to the website This is Dairy Farming, and Mark and Judy seem to hope against all hope that the code will drive people to the page. For anyone who might be mildly concerned about the safety of the cow, fear not, the QR code has been applied with a specially formulated kind of water-soluable spray paint, or in other words spray-chalk.

In the farmers’ defense, it’s not like the cow and its QR code will hanging out in a field in the middle of nowhere. Lady Shamrock’s pasture is on a popular tour route, meaning there are many visitors who will theoretically see the cow, and who might theoretically bother to scan a QR code. Jane explained the plan this way to the Melton Times:

“We host lots of farms visits, there’s a public bridleway here and we’re on the Leicestershire Round so this is just another way to engage with the public and show them we are a modern business which embraces new technology.”

New technology like QR codes. Or cows? She probably means the QR codes.

It’s definitely a clever little campaign, except for the part where it’s a QR code, and maybe the part where it’s spray-chalked on a cow. But who knows? Maybe this is exactly what the world of QR codes needs. After all, this is an impressive advance in moo-bile technology.

Jokes aside, I think QR codes can actually be pretty neat and here are some examples