Beer-Based QR Code Only Works With Guinness, Informs Everyone That You Are Drinking Guinness 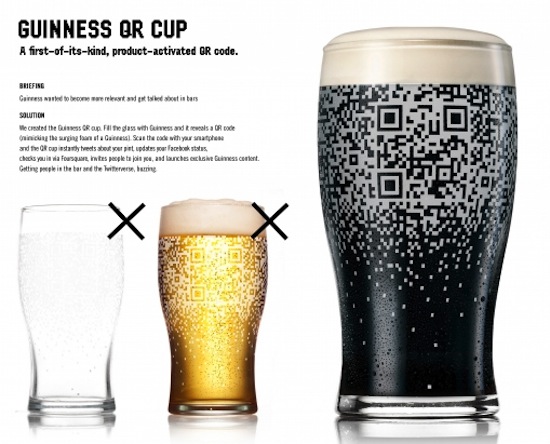 The marketing agency BBDO New York were tasked to come up with a way to get drinkers more engaged with Guinness. Not just any beer, but the thick-headed Irish dry stout. Their solution was a QR code printed on a pint glass. That might not sound all that interesting, but if you used a beer lighter than pitch-black Guinness, the code does nothing. Once scanned, the code launches an app that broadcasts to the world where you are and what you’re drinking. It’s fiendishly clever.

The pint glass campaign earned BBDO top prize in the John Caples International Awards, and was reportedly successful in getting people talking about Guinness on social networks. Which shouldn’t be too surprising. According to AdWeek, scanning the code:

[…] tweets about your pint, updates your Facebook status, checks you in via Foursquare, downloads coupons and promotions, invites your friends to join you, and even launches exclusive Guinness content.

While clever it may be, it’s more than a little silly. For one thing, it assumes that Guinness is the only dark beer out there — which is simply not the case. I suppose that smart marketers would distribute the glass only to bars that served Guinness as the darkest offering. But I’m willing to bet that if you threw chocolate milk in there, it would work just fine.

For another thing, the project draws a distinction between Guinness and “ordinary” beers, making it sound as if anything lighter than Guinness is inferior. That’s a matter of opinion, but the Guinness brewing company also produces the far lighter Harp Lager. Marketing may be specific to the product, but I seriously doubt that Coke would run an anti-Diet Coke campaign.

Lastly, BBDO writes in their project pitch that, “Guinness wanted to become more relevant and get talked about in bars.” Perhaps someone should inform them that they already make beer. 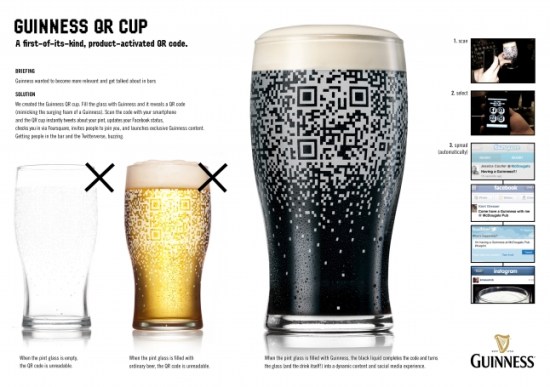 (AdWeek via The Verge)