Simon & Schuster Adds QR Codes to Books, is Half of a Good Idea 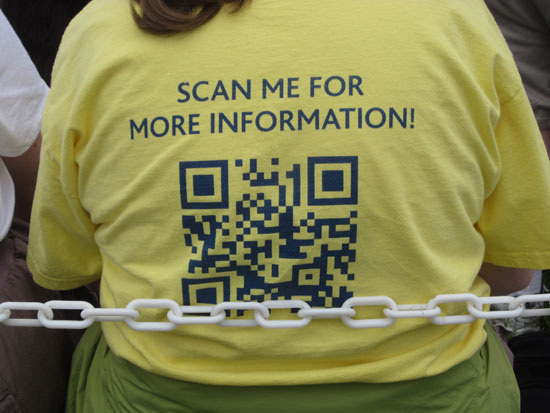 Publisher and mega-company Simon & Schuster has announced that starting this fall they will be adding phone-scannable QR codes to their print books. You might expect that this would give you access to special content, like videos or even a digital version of the book. You’d be half right, as there are some goodies awaiting scanners, but it’s mostly to (wait for it) get you to sign up for their email marketing. Lame.

According to Mashable, scanning the QR code on one of the forthcoming books will direct your phone’s browser to a S&S author’s page. There, you’ll be able to see forthcoming titles and watch video interviews with the author where available. There is, however, a big graphic encouraging people to sign up for an email list. In an interview with S&S executive VP of digital offerings Ellie Hirschhorn suggests that this is the point. From Mashable:

“The QR code is a way to use the distribution of our physical books as a means to build our [subscriber] database. This direct-to-consumer relationship then enables us to market future books and authors more cost-effectively,” she noted in a memo sent to publishers.

I see two problems with this. First, it’s assuming that anyone cares about QR codes. They haven’t been a big hit in this country, and despite increased visibility they’ve been maligned by a lack of worthwhile content and are sometimes cannot be scanned. The real problem with QR codes is that they require the user to actually do something, instead of just look passively at an ad. There haven’t been many QR codes that are worth scanning — people want to get something they like, and despite what marketing gurus tell us, they don’t actually want to interact with ads.

Which leads to my second point: The content S&S is offering sounds pretty weak. While this is, as Mashable points out, a low-cost effort aimed squarely at bolstering email sign-ups, it’s probably not going to do that and it’s not going to train users to interact with QR codes in the future. I can only speak for myself, but if I bothered to scan the code and was greeted with maybe at best a short video with the author, I certainly wouldn’t bother signing up for emails and would definitely never scan the codes again.

The marriage between print and digital is still a rocky one, and no one has really figured out how to do it. However, pre-canned content and pushing your email marketing probably isn’t the best way. However, the industry might do well to look at the recently announced Special Edition Scott Pilgrim books as an example. There, print edition buyers get access to the digital version of the book for free.

For publishers, a scheme like this could be a win-win. First, it gives the buyer something nice that, really, costs the publisher very little provided a digital version of the book already exists. It would increase the download numbers for a title, which could be used to bolster confidence in the company’s digital endeavors overall.

Then again, I am just a consumer and want more stuff for less cost. But I also see QR codes as a missed opportunity to bridge the gap between print and digital, and I don’t see this S&S scheme fixing that fault any time soon.