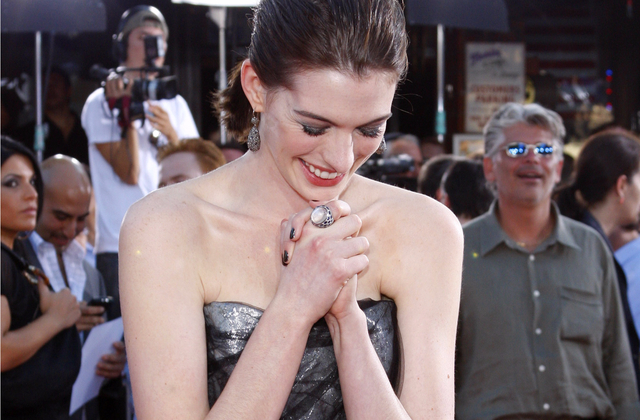 It’s been just over four years since the 2013 Oscars, when Anne Hathaway won the Best Supporting Actress award for her role in Les Miserables. That was also around the time that it became socially acceptable to profess a hatred of the actress. The internet was full of tear-down pieces picking apart why the whole world had taken to shouting their distaste.

There were a lot of reasons, it seemed. People claimed she tries too hard. The term “musical theatre kid” got thrown around a lot. This was right when Jennifer Lawrence’s star was starting to rise, and the comparisons were endless. Why couldn’t she be more like JLaw, who doesn’t try at all, she’s just so effortlessly cool, right? How many people, both in life and on the internet, have you heard say they don’t even know why, they just don’t like Anne Hathaway?

Everyone has different tastes, and we all have actors we don’t care for. We all meet personalities that rub us the wrong way. If Anne Hathaway isn’t for you, that’s fine. But we can’t pretend like the widespread, mass-hating of Hathaway was rooted in anything but straight-up misogyny.

It’s the “I don’t know why” that’s the most telling. Think of the male actors or celebrities (or, say, politicians) on your Don’t Like list. In general, when we dislike a man, we can articulate the reason. Often we can point to very specific actions or career choices. The dislike of a general vibe isn’t necessarily just limited to our view of women, but it is certainly skewed.

And the reasons that do exist are overwhelmingly gendered as well. Women get torn down when they are perceived to try to hard, but they get equally dragged when they’re seen as not trying or caring enough (see: Kristen Stewart), when their apathy reads as ingratitude for the opportunities in front of them. You have to walk a very fine line of seemingly effortless cool and perpetual politeness to be deemed likable in Hollywood (and, really, the world). And that’s not real, or realistic. Just look at the backlash that eventually began to grow against Jennifer Lawrence herself, when the world decided she was, in actuality, trying too hard to come off as chill.

Following her Oscar win, Hathaway laid low for a while (either by choice or because perceived likability has a direct correlation to career opportunities for young actresses), before being cast in Interstellar. In the years since, the Hatha-hate has lessened, but now, finally, that entire era has been declared over and dead by the general internet. This week, The Observer wrote “You Are Wrong and Also Dumb if You Hate Anne Hathaway.” Vulture wrote “It’s Not Cool to Hate Anne Hathaway Anymore.”

There are NO GOOD THINGS about Trump*

*Except that his win made realize my hatred of Anne Hathaway was internalized misogyny!!!

This new era of realizing the role our own internalized misogyny played in our feelings about Hathaway is perfectly timed with the release of Colossal, which is being read, at least in part, as a parable for the pressures society places on women. And in her publicity tour for the movie, the subject of society’s distaste for her keeps coming up. In fat, Hathaway says it’s brought up in every interview she does. While that sounds like an awful thing to do–to mention to someone how widely disliked they are, as if that’s not going to be painful to hear–hopefully this really is the beginning of the end of the misogynistic Hatha-hate. She told Jezebel earlier this week,

I think it’s weird that it continues to be talked about a little bit. I understand in the context of this movie, why it should be brought up. But it comes up in every interview I do, just about. I am… not eager, but I am ready for the conversation to move to a place beyond it. I don’t have to contextualize all of my stories, all of my experiences through that time. I’m ready for it to be implied, not overtly stated. But I’m also not in the driver’s seat of this interview.

That interview, in particular, is fascinating. Hathaway talks about how even though she doesn’t necessarily have a “rhino skin,” she can look back on all the hate that flowed her way and “see all of that for what it is.” And the idea that there is something beyond just genuine dislike, that there is a wider societal ill behind how we talk about women, is backed up by the interviewer’s own experiences as he recounts them.

Because Rich Juzwiak was one of the writers writing those “Why We Hate Anne Hathaway” articles. During the interview, Hathaway mentioned that she would come across those pieces, even on Jezebel, and they made her feel awful. (She ended the interview by saying “Tell Jezebel I love them even if they don’t love me!!!”) Juzwiak says he didn’t write those pieces for Jezebel, but he admits that he wrote them for Gawker.

At the time, I thought I tried to examine the Hathaway hatred as a phenomenon, and with the caveat that, despite it all, she was still winning. Still, I was overly harsh at times, and I certainly didn’t consider Hathaway’s humanity to the extent that I should have. In fact, after we spoke, I found a post I’d published that made me rethink my entire approach to this interview.

Even worse, you might remember when an upskirt paparazzi photo of Hathaway made the rounds a few years ago. She went on the Today Show and Matt Lauer made the super skeevy joke of “Seen a lot of you lately.” Hathaway said during that interview,

It was obviously an unfortunate incident. It kind of made me sad on two accounts. One was that I was very sad that we live in an age when someone takes a picture of another person in a vulnerable moment, and rather than delete it, and do the decent thing, sells it. And I’m sorry that we live in a culture that commodifies the sexuality of unwilling participants. Which brings us back to Les Mis […] So lets get back to Les Mis.

Poise and grace all over the place, but sure, she’s the unlikable one.

Anyway, Juzwiak says that he had completely forgotten about that incident, until after the interview, when he was looking up old articles he’d written about Hathaway and remembered that not only had he written about it, but he’d been among those reposting the image–an image of Anne Hathaway, sans underwear and just trying to exit a damn car in peace. He says that while he didn’t remember writing it, he’s sure it didn’t mean much to him at the time. “It was just another piece of content that came and went as soon as I hit publish.” He says remembering this now, when not as many mainstream outlets would post that sort of invasive photo so casually, and revenge porn and consent culture are actual subjects we talk about, he feels terrible.

So he asked for a quick follow-up interview to apologize, along with a note saying he was “sorry for posting that picture, that causing her pain was not worth a stupid blog post, that my values have changed, and it’s not something I’d ever consider doing again.” Hathaway’s publicist said she’d pass along the note, rather than schedule a follow-up. In the interview’s post-script, he says,

I think that is fair. While I wish I could have apologized directly to Hathaway, it could have created a viral moment that would have been undeserved (“Anne Hathaway Confronts Blogger Who Posted Her Exposed Crotch”; “Blogger Apologizes to Anne Hathaway for Being a Male Shithead and You Won’t Believe What Happens Next”). It would be inappropriate to re-profit, so to speak, off of something that I shouldn’t have done in the first place—it would be like getting an award for bringing myself up to the level of morally neutral.

Anne Hathaway has gotten some great professional opportunities over the years, but she got a raw deal when it came to public perception. We see the way she was talked about then, and how little has changed. That “There’s just something I don’t like about her!” is so reminiscent of the narrative around Hillary Clinton, I want to scream it from the rooftops. But now, at least, we’re becoming more aware of the larger implications of that kind of view. Not as many major outlets would cover such a gross invasion of privacy. We talk about misogyny on a different level, and female autonomy, consent culture, and sexual harassment aren’t so easily dismissed. We can discuss openly how these vague, negative critiques of women’s personalities are rooted in something dark, something that has far less to do with the woman herself than with the way the world views womanhood. And seeing a former Gawker writer flip a 180 and be forced to come to terms with his own role in societal misogyny is a joyously painful, deeply cathartic experience. He ends by saying,

I hope that Hathaway read my note, or is reading this, and I hope it’s clear how sorry I am for publishing a picture of her body without her consent. I hope, too, that this incident emphasizes the strength of her character. Anne Hathaway was under no obligation to talk to me—in fact, given her feelings about Jezebel, she had good reason not to (or to merely turn down the interview—there are plenty of interested takers at other outlets because Anne Hathaway continues to be doing fine). And yet she showed me a level of civility above and beyond what I had extended to her. Colossal is a movie about being the bigger person—sometimes rendered literally—and it couldn’t have a more appropriate star playing its lead.

We’re not at the finish line, but we’re making progress.