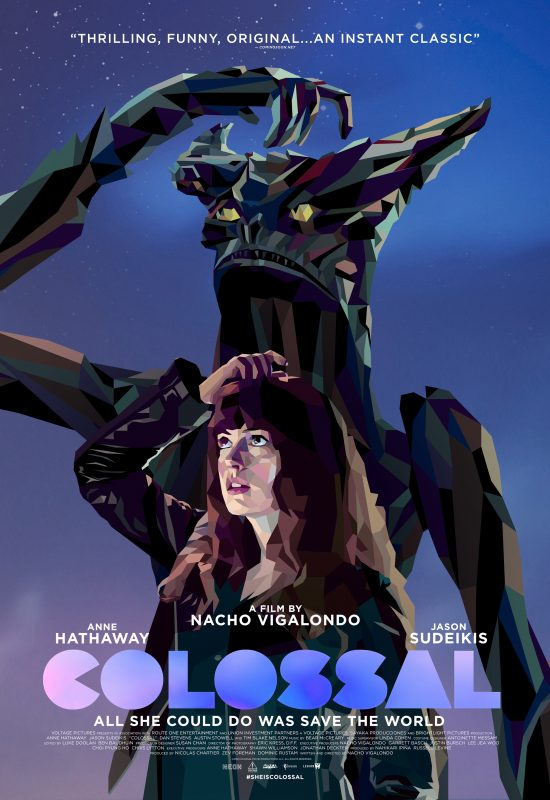 It’s the kind of film where I’m afraid of telling you too much, because I’d be doing this fascinating, oddball story a disservice. Colossal is a film that’s best experienced almost blind, which is basically how the film’s protagonist walks through much of her life.

Gloria (Anne Hathaway) is a complicated, troubled woman. A writer and party girl who’s long unemployed, she gets kicked out of her boyfriend’s (Dan Stevens) apartment, which forces her to leave New York and move back to her small hometown. When news reports of a giant creature destroying Seoul, South Korea begin to surface, Gloria gradually realizes that she’s somehow connected to this far-off phenomenon. As events spin out of control, Gloria needs to figure out why her seemingly insignificant existence has such a colossal effect on the fate of the world.

And yeah, looked at entirely differently, it’s a satisfying movie for those who like monsters fighting robots.

Gloria is the rare female film character that doesn’t feel like a film character. She feels like someone you might meet at a party and, depending on her mood (or yours), you might not even like all that much. She’s self-centered, destructive, lazy and entitled, and yet you find yourself rooting for her, because you can feel that underneath all her defense mechanisms, she’s a hurt child trying to make sense of her life.

This beautifully-drawn character is in large part due to Vigalondo’s script. However, not enough can be said about Hathaway’s nuanced, vulnerable performance. She easily flows from snark, to sadness, to fear, to power, and watching her face navigate all that nuance is almost worth the price of admission all by itself. She’s also really, really funny.

She’s supported by a frightening and compelling performance by Jason Sudeikis who plays Oscar, the childhood friend with whom Gloria reconnects when she’s back in her hometown. I was impressed with his dramatic performance in Race last year, but this performance kicks it up a notch. It’s surprising and very well done.

Vigalondo is a talented, creative storyteller who manages to work huge monster movie tropes into what is essentially a small, character-driven indie film. The film deftly balances comedy and drama, magical realism and a gritty truthfulness without feeling disjointed. It’s confident and knows exactly what movie it is at all times, even as it bounces between tones and genres.

Now, it’s not a perfect film. Hathaway’s character is surrounded by men, which is a bit disappointing. If one is looking at the film through the lens of female oppression, this might make some sense story-wise. Still, this film only passes the Bechdel-Wallace test once in a short scene at the end, and even then, well … again, I’d be spoiling things, but the two women in question just barely miss talking about a man.

Speaking of the men, there was one male character in particular who seemed to serve no function, despite being set up as having some importance. Oscar introduces Gloria to two of his friends, played by Tim Blake Nelson and Austin Stowell. Both Sudeikis and Nelson’s characters have demons they’re fighting. Stowell, however, sticks out like a sore thumb. While the script hints at him having bigger issues than are obvious, there’s no payoff for that character, and so every scene with him in it seems like a waste of time. This isn’t a slight against Stowell, who is endearing in the film, but his role represents a loose thread. A missed opportunity.

That said, this film is thoroughly Gloria’s story, and as such it shines. Come for the intriguing take on familiar topics, the likes of which you’ve never seen before. Stay for the brilliant performances. And be thoroughly prepared to dissect the film at length afterward with your movie-going buddy. Colossal is a film that will have you examining Gloria’s life, as well as your own, for days.