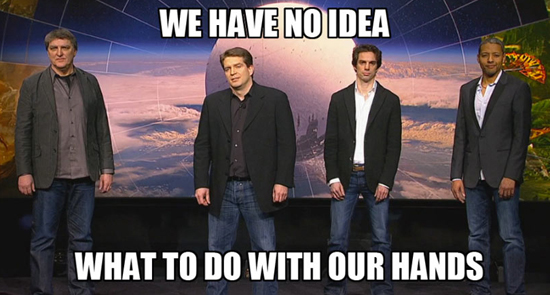 During Sony‘s event where they finally revealed the long-expected PlayStation 4, Bungie was brought on stage to reveal that their newest video game, Destiny, would also be coming to Sony’s next-gen console. Unfortunately for Bungie, someone apparently told their presenters to look as awkward as possible. It was… painful, to say the least. The image above came out shortly after as a direct result, and the entire Internet chuckled at their seeming discomfort. Now Bungie has accepted this fate, and posted a photo of the entire staff in blazers trying to look just as awkward.

As part of a post answering mail yesterday, Bungie responded to their Sony event shenanigans as follows:

Everyone on the Internet What in the world was up with those four Bungie guys on Sony’s stage?

I know, right? We’ve been chasing the answer to the question from the moment we picked ourselves up off the floor and stopped laughing. Details are still murky, but from what we can gather Marty may have instructed our four friends to “keep their hands out of their pockets.” We also may or may not have a Men’s Warehouse directly below our studio.

You’re going to love the way we look into the void.

[image here which breaks our site’s formatting for whatever reason]

From their idle hands ushered forth an invitation to a new community of gamers. Though this foursome clearly didn’t appear enthusiastic – or capable of experiencing any human emotion – we are super stoked and incredibly fortunate to be able to welcome a whole new group of gamers into the Bungie fold.

Okay. Excellent response, with a level of self-awareness and humor that’s sort of unexpected. It gets better, though. Further down the page, they actually posted an photo of the entire staff dressed in blazers trying to imitate the stance, gaze, and altogether awkwardness of the above image. It’s glorious:

Click that for the full image, and bask in the glory that is this photo.