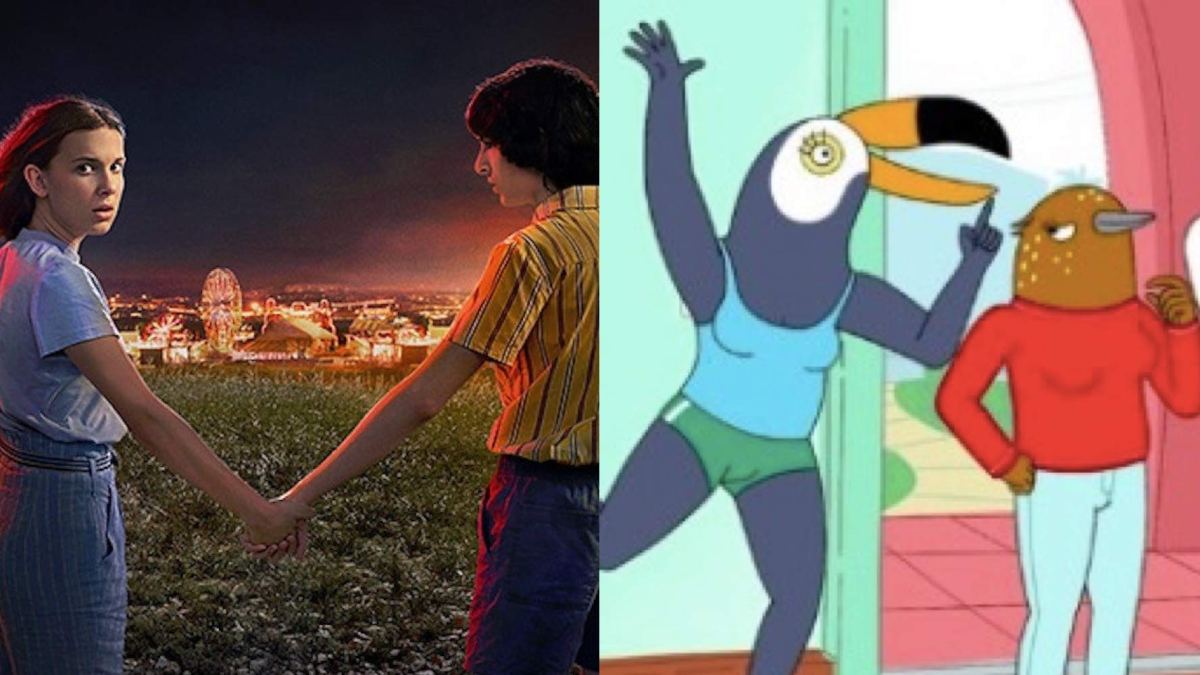 I tend to believe that a show becomes popular through word of mouth these days. Not that it’s a bad thing, but very few of us watch commercials anymore, getting our information mostly from social media instead. The problem with Netflix is that the shows they promote the most tend to be shows that, arguably, don’t need promoting. Trust me when I say that if you put out one poster for Stranger Things, we’re all going to know when the show is premiering.

At the same time, shows like Tuca & Bertie are canceled because there is virtually no record that the show exists online, other than fans who already watching the show praising it. Netflix, in all its glory, should be the one out there giving us trailers and jokes and letting us see the beauty that is One Day at a Time instead of promoting the shows that are more white and heterosexual. Look at a show like Sense8—diverse, beautiful, and canceled because Netflix didn’t promote it in the same way they do shows like Stranger Things.

That’s where the problem lies, and in asking Twitter what to do, it’s both letting the people know that at least they’re trying to be better, but also that Netflix doesn’t see the problem with how they are currently promoting their shows. So, when Netflix’s social media manager, Jarett Wieselman, took to Twitter to ask what Netflix could to better to promote their shows, the answers weren’t that surprising.

when a Netflix show gets canceled, “you didn’t promote the show” is something we (yes I work @ Netflix) hear a lot. But what does that mean to you?

commercials/billboards? too few social posts? you’re not shown the title when you log on to netflix? something else? combo of all?

Wieselman went on to talk about how there are no wrong answers, and that, as someone who works for social media at Netflix, he was genuinely curious. To which I say good, but also, it seems like a very obvious thing to me? With the way social media influences the entertainment world, isn’t the simplest response to just have Twitter accounts engaging with people?

Look, for instance, at the Spider-Man: Far From Home Twitter account. They spend their days trolling fans (in a fun way) and getting interest in the movie up. Netflix using that same tactic would be the smartest approach. Other Netflix users had great ideas too.

It means that every time I turn on Netflix I see the same autoplay preview that they’re pumping all their effort into. This week it’s Comedians in Cars, before that it was Aziz. I couldn’t be less interested in either of those things but there they are, every time without fail. https://t.co/d7Yyx2WeZd

Maybe there should be a “spin the wheel” type mystery box where each day u click on it and Netflix suggests a new lesser known show (according to your likes)? There’s so much there, a lot can get lost

The lack of promotion of Sense8 once season 2 dropped was startling Jarrett. I saw almost nothing about.

Netflix doesn’t release its viewing figures, so we don’t even know if the show fared badly. It’s a first season; it wasn’t given a chance to grow. We’re all shareholders in Netflix, yet it’s answerable to… nobody? It’s not enough to say that Netflix didn’t “promote” the show. https://t.co/G8bjhokyMs

Whether or not Netflix will actually use any of these tactics is an entirely different issue. It’s a website designed to keep us entertained but in the dark about viewership figures and what is happening on their platform, so who knows what will happen in the future. Hopefully, it will be better promotional tactics, though.