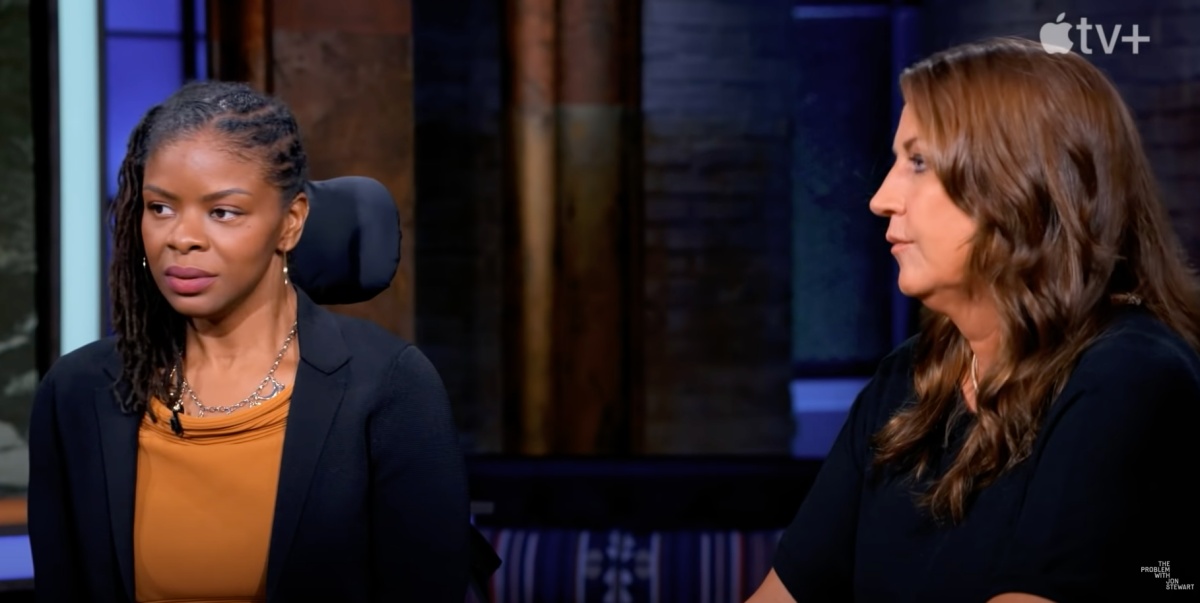 The Problem With Jon Stewart has brought the Daily Show host back into the business of teaching audiences about the news, and in his latest episode, “The Problem With Guns,” he attempts to examine the failure of legislation to deal with the correlation between gun violence and domestic violence.

“Guns” brings on two guests, April Ross and Janet Paulsen, both of whom have been victims of domestic and gun violence from their husbands.

Ross explains how her husband was not physically abusive, but emotionally and financially, and always said the only way she would ever leave their marriage was dead. When Ross was finally able to leave and made strides to remove herself from that situation, her husband shot her. The only reason he didn’t kill her was that she passed out and he assumed she was dead. The shooting left her paralyzed from the chest down.

Janey Paulsen spoke about her experience in Georgia with a husband who owned 75 guns. When she made her final attempt to leave him and was threatened by him, she got an order of protection. When that happened, the officers were supposed to take every gun away from her husband. They took all except one that was in his car because it was a “grey area.” That gun was later used to shoot Paulsen, who now uses a wheelchair as a result.

That shared trauma is how the two women met and moved forward to try to bring forth legislation that will actually work on protecting domestic violence survivors and keeping guns away from those who have been convicted.

Within the panel, Paulsen explains that she does have a license to carry a firearm, at the insistence of police officers, but she explains that is not the solution for the issue of domestic violence. Police officers also need to do their jobs when it comes to protecting people and taking guns out of the hands of people accused of domestic violence or under orders of production by their partners.

What also complicates issues, as was brought up in the episode, is that police officers have high rates of domestic violence in their own families, something that The Atlantic wrote about back in 2014 but was covered again as recently as September of 2021:

[…] the National Center for Women and Policing noted in a heavily footnoted information sheet, “Two studies have found that at least 40 percent of police officer families experience domestic violence, in contrast to 10 percent of families in the general population. A third study of older and more experienced officers found a rate of 24 percent, indicating that domestic violence is two to four times more common among police families than American families in general.” Cops “typically handle cases of police family violence informally, often without an official report, investigation, or even check of the victim’s safety,” the summary continues. “This ‘informal’ method is often in direct contradiction to legislative mandates and departmental policies regarding the appropriate response to domestic violence crimes.” Finally, “even officers who are found guilty of domestic violence are unlikely to be fired, arrested, or referred for prosecution.”

The problem is structural, and cops are not trained in how to deescalate these issues, which is why so many cops are killed when dealing with domestic violence calls.

Right now, the problem is structural, and those who believe in gun rights should work to make sure that bad guys with guns don’t have access to them. Owning a gun would not have saved these women from being surprise attacked by their partners. Their partners not having legal access to firearms would have.

We don’t have a perfect system of figuring out who is going to commit gun violence, but we do know that The Gun Violence Archive reports “that at least 190 mass shootings (defined as four or more people injured or killed) since 2013 have been domestic in nature.”

“Researchers from the Educational Fund to Stop Gun Violence and Johns Hopkins analyzed 110 gun murders of four or more people between 2014 and 2019 and found that in 68 percent of incidents, the perpetrator either killed an intimate partner or a family member, or had a history of domestic violence,” says The Trace.

We have the statistics; we have heard from advocates. It is time to do something about it.