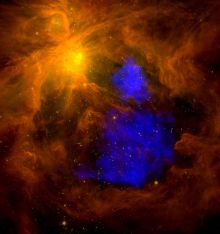 As far as our understanding of the universe goes, everything started with the big bang which jump started existence. However, only the three lightest elements — hydrogen, helium, and lithium — were  produced during the big bang itself and all the rest were formed in the nuclear furnaces within stars. Scientists had theorized that somewhere in the universe, untouched pockets of the very first elements should still exist undiluted by heavier elements.

The gas clouds, one of which consists entirely of hydrogen and the other of hydrogen and deuterium (a variant of hydrogen), were found by Jason Prochaska and his team during a study of distant galaxies. The team observed light from quasars as part of their galatic survey, and found that the light passed through the gas clouds between the quasar and Earth. The surprise came when further analysis of the light revealed that the intervening gas clouds contained only the primordial super light elements.

If the clouds stand up to further scrutiny, they could give scientists a look at the very earliest matter in the universe — the stuff that made the stars which in turn made everything else. Perhaps more importantly, the discovery could serve as a valuable proof that the going theory of the universe’s origins is correct.

With the discovery of the two clouds, discussed in a forthcoming edition of the journal Science, scientists are now looking for other such cosmic left overs. With any luck, they’ll be successful and build up a clearer picture of the early universe as well as a greater undersanding of how stars and galaxies are created.

(ABC Science via Reddit, image of Orion nebula via Wikimedia)