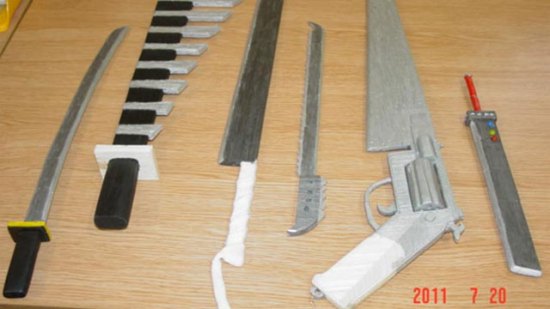 A prisoner serving time in Monmouthshire, Wales was found to have an extensive arsenal of do-it-yourself swords. The swords, made of matchsticks, included a few swords from the Final Fantasy canon, as one can see Cloud’s iconic Buster Sword and Squall’s Gunblade above, among others.

Obviously, the swords are not to scale compared to one another, as the Gunblade shouldn’t be larger than the Buster Sword, but maybe the size difference between the two is because the Gunblade actually features a fully revolving barrel. The governor of the prison, Steve Cross, told the tabloid The Sun that the realism of the swords presented a threat to staff safety, not because they could be used to send the staff back to the Lifestream, but because they look real from afar and could be used to threaten people.

A security bulletin noted that the prisoner’s matchstick hobby “blended fantasy with deadly functionality.” I mean, sure, if he had the right materia slotted in.

(The Sun via Kotaku)