My absolute first impression of Princess Ugg was that it’s like a baby Red Sonja, which may be what hooked me because BABY RED SONJA HOW ADORABLE WOULD THAT BE?? But that actually only tells half the story. We may start out introduced to a bonnie wee redheaded berserker, but this is really a tale of two princesses. A brash barbarian princess travels from her home in the frozen north to a sunny and warm “civilized” world for a more formal education, and is paired with the local, more traditionally feminine princess in your typical odd couple scenario: 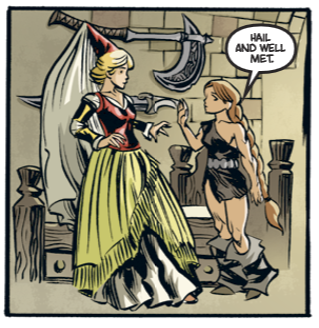 And while that may sound like something of a clichéd set-up (I can’t help but think of how it played out in Wicked, for example) Princess Ugg quickly reveals itself as a princess story that hits all our favorite points about princess stories without falling into the saccharine pit of fluffy birds and mice that do your bidding and waiting for your prince to come rescue you. Which is not to say the book is without animal companions, as early on we are introduced to a talking eagle, and then of course is Princess Ulga’s faithful companion, Snorrl: 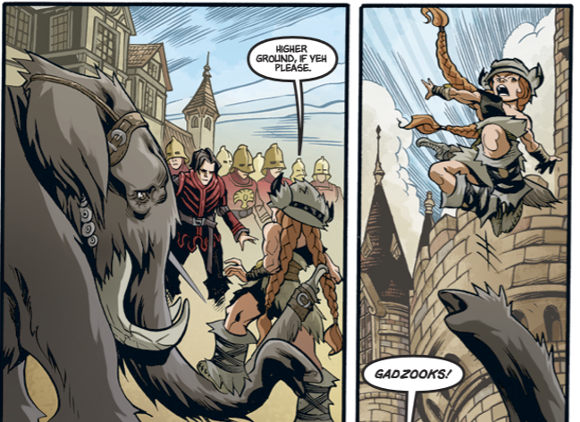 And I honestly can’t complain about a rideable wooly mammoth because who WOULDN’T want one of those?

The story may feel like one we’ve all heard before, but I’m enjoying the depth with which the characters are written and the heart they each display. The book begins with Princess Ugg learning valuable lessons from her mother, who appears as a strong barbarian queen in her own right. Princess Ugg’s father, too, is not some stand-in antagonist whose only character feature is to obstruct Princess Ugg. Instead he comes across as a compassionate and understanding parental figure. In fact, this book is rather riddled with interesting characters, none of which smack of cliché in and of themselves despite being set in a familiar sort of story. Which is pretty impressive for a debut issue where all of these characters are just being introduced. Generally it’s all too easy to rely on tropes and clichés to fill in character traits only to debunk them later, but Princess Ugg does a good job of making it clear from the start that while you may think you know the story, you don’t know the people in it or how they’ll be utilized by the story. Given that premise, I’m honestly hoping to see redemption for both princesses; it seems like an opportunity for not only the spoiled local princess to show hidden depths, but for the refinement of the brash barbarian princess.

Of course, what’s a good graphic story without the art to accompany it? Much of Princess Ugg‘s depth is expressed as much through the coloring and inks as the words on the page. The inks and watercolors both evoke a sort of older age of graphic novels, more Bone-era style than our more modern tights-n-flights exhibitions, and it’s a style that serves the story well for exactly the reasons outlined above; it first puts you in a place that seems all-too-familiar and allows you to feel comfortable even as the story gets subverted by interesting characters and a set-up to a vast and colorful piece of world-building. On a more personal note, I absolutely adore good watercolor and this book is lush with it, absolutely gorgeous in the depth and texture provided by the colors alone.

It’s definitely a great start to a good all-ages comic, the kind that gets categorized as YA or children’s lit but is really a good story for everyone, just minus the grimdarkgrittiness that gets something labeled as “mature” or “adult.” To be honest, there’s nothing immature about this, and I greatly anticipate seeing what kinds of themes and ideas the series decides to explore, as it’s set itself up quite nicely to go into a lot of deep and meaningful directions. At least, that’s my hope, and I guess we’ll see what happens when I pick up the next issue!

Princess Ugg is written and illustrated by Ted Naifeh and colored and lettered by Warren Wucinich. It’s available from Oni Press.

Jaydot Sloane is a webcomic author/artist at Vanity Games, where she updates three times a week with silly little gag comics that are almost entirely drawn from a real life of living with two dogs, three cats, her ex-husband and his girlfriend, her current boyfriend, and soon to be her first child. Kind of like Full House, if Full House were full of swearing and dog fur. 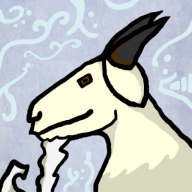