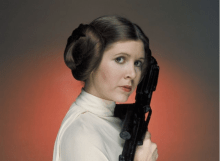 Carrie Fisher, who played Princess Leia in the Star Wars trilogy, admitted today that she used cocaine on the set of The Empire Strikes Back. On Hoth, no less.

“We did cocaine on the set of Empire, in the ice planet,” Fisher said in Sydney.

“I didn’t even like coke that much, it was just a case of getting on whatever train I needed to take to get high.”

Though that first “we” may spark theories among Star Wars fans, Fisher wouldn’t say which of her co-stars used drugs with her.

“It’s always been my responsibility, if it was Hollywood then we’d all be dope addicts,” she says, declining to divulge which of her Star Wars co-stars joined in with her high jinks.

(AAP via Breitbart via Drudge Report)