Video games based on movies get a bad rep. That’s fair, because honestly, most of them suck. One of the most agreed-upon worst games of all time, E.T. the Extraterrestrial for Atari, is a game made in homage to a movie, and we were only brave and curious enough to excavate the copies buried in shame in the ground three decades after the fact.

It’s natural that games and movies see so much cross-over because of two reasons: both are popular ways to reach a mass audience (which is why big movies get a line of toys and other merchandise) and both involve visual storytelling. That’s even more true today with big-budget cinematic games like Uncharted, known in some circles as “Indiana Jones: the Game.” The difference between them is how the audience participates: as a spectator or as the one pulling the strings.

So I’m surprised—yet not surprised—that after 30 years, people are still enough in love with the beloved classic The Princess Bride to want to make a game about it.

Gameblend’s The Princess Bride for iOS takes some of the iconic scenes from Rob Reiner’s film and turns them into levels that you can reenact. Because who doesn’t want to relive the movie by stepping into the hero’s shoes or helping the good guys win, right? That’s something we’ve never been able to experience before, except with games.

Take Alien: Isolation, the recent first-person survival-horror game from developer The Creative Assembly and publisher Sega. It resurrected a movie that was released almost 40 years ago—which, admittedly, makes more sense considering it had three sequels on through the late nineties, crossovers with Predator in the 2000s, and is more fresh in people’s minds due to spin-off prequels like 2012’s Prometheus. But Alien: Isolation submerged players in the story in a new way: through the eyes of Ripley’s daughter, Amanda.

For Gameblend, the opportunity arose out of luck. “We are huge fans of The Princess Bride,” Scott Balaban, a partner at Gameblend, told me in an email. “So, when we learned that a company we worked with had the movie rights, we were eager to get the license.” Gameblend’s The Princess Bride takes us back to the shrieking eel-infested waters, where Buttercup tried to swim away from her captors but thought better of it. She didn’t fight them in the film, but in the game, the invisible fingers of the player bop the eels right on their ugly heads to keep them from reaching the princess and swallowing her whole. It’s a little like whack-a-mole with sea creatures and shiny coins.

It then takes us to the Cliffs of Insanity, where the Man in Black must climb a seemingly endless rope, avoiding falling rocks, angry swooping seagulls, and other hazards to reach the top.

The sword fight with Inigo, the wrestling match with Fezzik the Giant, and the battle with R.O.U.S. (Rodents of Unusual Size) in the Fire Swamp are such suspenseful, memorable, and action-packed set pieces that they’re perfect fodder for a game.

The Princess Bride film was a relic of its time, when fantasy movies starred David Bowie, gorgeous young up-and-coming actors, and misty worlds complete with claymation, creature puppets, and dramatic theme songs that were either so unbelievably good or bad you didn’t care. The NeverEnding Story. Labyrinth. The Dark Crystal. The Last Unicorn. The heroes survived the Pit of Despair to emerge into the Woods of Terror, overcome the Swamp of Greed, and then finally climb the Tower of Ultimate Doom. The stories were a series of trials, but in a way The Princess Bride surpassed them, possessing all these traits but daring to make fun of itself and the genre. I still can’t understand some of the lines in The Princess Bride for the spotty sound quality, but they have more charm and wit than other fantasy movies combined. (Disclaimer: I’m not knocking any of the aforementioned movies because they’re all amazing and I love them.)

To put it simply, The Princess Bride stood out because it was more than the sum of its parts: the shrieking eels, the Fire Swamp, the Cliffs of Insanity. Gameblend’s title is little more than that, topped off with sound bytes and gameplay so grindy that you’re inclined to give into those in-app purchases so you can pay to win. I mean, those seagulls had it out for me. One hit and I was dead—even Inigo was more merciful with helping the Man in Black reach the top of those cliffs. I think he had it easier.

That’s not honoring a movie that’s been remembered fondly for nearly 30 years. That’s not paying respect to fans. That’s a quick cash grab. 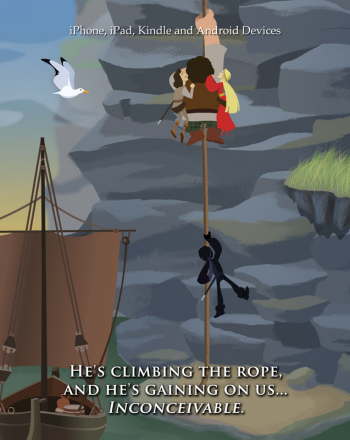 I’m not saying Gameblend’s The Princess Bride is terrible. It’s actually pretty well animated, with nice details like The Impressive Clergyman on the “pwaused” screen and “gameplay closely reflecting the action,” as Balaban put it. It’s clever with how it ramps up the challenge. I fought not one kind of shrieking eel but several—huge red bosses and tiny green babies. Each round felt different in a small way. But I didn’t really have fun.

It makes sense why Gameblend chose to make it a mobile game. “For the type of game, we knew that Princess Bride has a very large fan demographic,” said Balaban. “So it was important for us to design a game that was easy to learn and play but still was able to scale up and challenge seasoned gamers. So we took a look at the movie, picked out classic and favorite scenes, and created arcade style mini-games for each. These types of games are a great fit for quick play sessions and work well with mobile game controls.”

Mobile games reach a lot of people. A lot. So maybe while I—someone who tends to frown upon free-to-play games, especially ones with IAP—have a problem with in-app purchases in The Princess Bride, other people won’t mind playing what they can for free and ignoring the rest. They’ll just be happy to have the chance to experience the movie in a different way.

But at least Gameblend certainly did a better job than Worldwide Biggies did in 2008 when it released its PC adventure version Princess Bride Game. I couldn’t reach the developer for comment, which isn’t surprising considering how awful the thing is. I mean, talk about missing the point.