Not the future anyone wants. 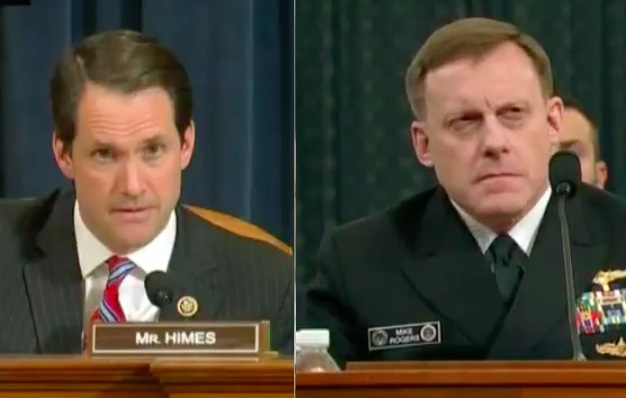 It’s possible that you’ve somehow become aware of the incredibly obscure story today that FBI Director James Comey and NSA Director Michael Rogers had a congressional hearing in front of the House Intelligence Committee. By now, for better or worse (mostly worse, so far) we’ve all gotten used to Twitter playing an outsized role in our government lately, and the hearing saw multiple Trump tweets debunked, but one in particular still managed to feel unusual to our numb, jaded brains.

Trump’s past tweets about President Obama tapping his phones (again, yes, he specifically mentioned phone tapping without any ostensibly obfuscating quotation marks) were quickly brought down, but his ongoing tweeting from the POTUS Twitter account managed to get in on the action live in what can only be described as the most mundane Black Mirror episode ever. Take a look:

“Thanks to modern technology that’s in front of me right here I’ve got a tweet from the president.”

It’s hard to say whether Comey and Rogers seemed more confused due to the misconstruing of their words or the fact that they were hearing the president’s livetweet of their hearing read back to them during that same hearing. During its livetweet—seemingly carried out by a staffer, based on spelling, grammar, and Trump’s schedule—the POTUS account also claimed that former Director of National Intelligence James Clapper was correct to say that there was no evidence of collusion between Trump’s campaign and Russia … except he supports the ongoing investigation, said there was no evidence in the intelligence community’s previous report, and said through a spokesperson that he hadn’t seen any “conclusive” evidence by the date of Trump’s inauguration—he doesn’t know what, if anything, has been uncovered since then.

Basically, we all feel a lot like this right now: