Predators Can Probably Learn How To See Through Camouflage, So Nowhere is Safe

Do we mean the aliens, the drones, or the guys Chris Hansen sends to prison? Your call. 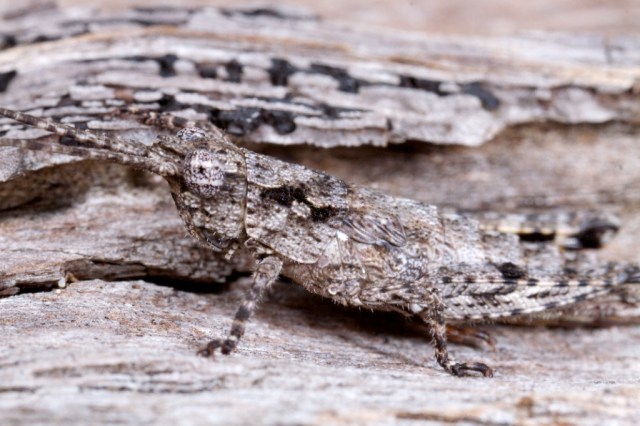 See the adorable little grasshopper hanging out in this picture? No? Good — that’s what he wants, because you might be a thing that eats grasshoppers and he would prefer to continue being alive. But as scientists at the University of Exeter have found, camouflaging yourself isn’t always an 100% effective strategy for keeping predators at bay.

According to research that was recently published in PLoS One, an open-access peer reviewed journal, a team led by Dr. Jolyon Troscianko decided to test human volunteers to see whether or not they were able to spot computer-simulated moths against a background image of common oak bark.

The results? Naturally not everyone did as well the first time around, particularly when certain types of markings were exhibited on the moth. For example, “prey with a single white marking”  were surprisingly less visible than prey that matched its background — at first, that is. Over time, however, the human observers were able to learn from their mistakes and spot their prey more quickly. This differs in a major way from other research done on the subject, most of which involves the initial detection period and doesn’t track how well their subjects d0 over time.

Ultimately the team concluded that “the overall value of a camouflage strategy is determined not just in terms of how it defeats predator sensory processing, but also how it defeats perceptual and cognitive processes” — meaning that a successful camouflaging prey doesn’t just hide from its predator, it tricks them into distrusting their own ability to see anything altogether. That’s why zebras travel in such close knit herds, for example; everybody can see them, but the large mass of stripes will confuse the heck out of most things that wanna eat them, at least at first glance.

Furthermore, if humans can learn and adapt to spotting camouflaged creatures more frequently, then other predators might also be able to do the same thing. Which means that only those really smart predators who can adapt more quickly will survive, and then their prey will also have to adapt their methods of hiding and their smartest offspring will be the only ones to continue the species, and is this sounding familiar to anyone else?

Okay, technically it’s not the “circle of life” so much as it is one of the core tenants of natural selection. But come on. Darwin never put On the Origin of Species to music this catchy. Just saying, maybe more people would have been into it at the time if he had