Cuttlefish That Change Shape To Avoid Predators | The Mary Sue 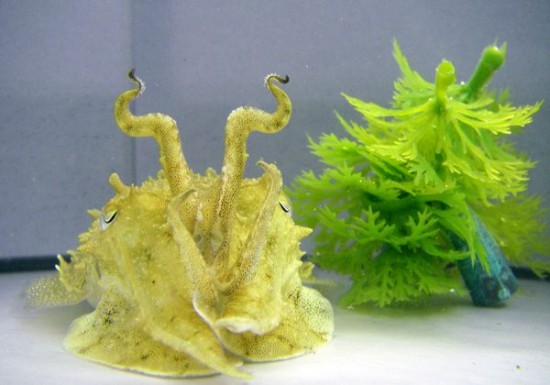 There are many examples of species that change their visual appearance to protect themselves from predators, most notably the chameleon. Among these color changing animals is the cuttlefish, and related species of squid and octopus, which have long been known to change their coloring to help them blend in with nearby objects.

But now researchers have shown that cuttlefish take blending-in one step further. New research from the Marine Biological Laboratory in Woods Hole, MA has demonstrated for the first time that Cuttlefish also change their physical position to make them appear inconspicuous to predators.

The researchers demonstrated that when a new object was introduced to a cuttlefish’s environment the fish would change its positioning to mimic the new object. This shows that visual stimuli can be used to trigger a reaction from the fish, in which it changes the positioning of its “arms” to make itself look more like the foreign object.

In addition to changing position in the presence of a new object, the cuttlefish also demonstrated the ability to observe and adapt to varying backgrounds. When placed in an enclosure with various vertical and angled stripes, the cuttlefish would raise its “arms” to align itself with the black and white bands. 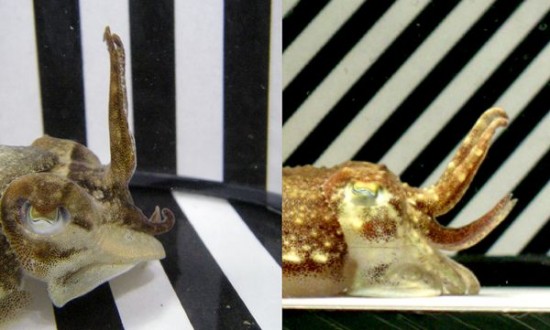 According to the scientists, this research serves as another example of adaptive behaviors implemented by cephalopods to throw predators off their trail. The paper on the cuttlefish shape-shifting was published in the Proceedings of the Royal Society B: Biological Sciences. The researchers hope it will inspire further studies into the camouflaging behaviors of other species.