Pre-Registration for J.K. Rowling’s Pottermore Opens, No One in the Potter Fandom is Allowed to Sleep Ever

J.K Rowling: Keeping kids awake past their bedtimes since 1997. When we were kids (and, let’s face it, like last week) it was staying up late to get to the end of Prisoner of Azkaban. Then it was the midnight releases, the midnight showings. Now, it’s Pottermore.

Officially opening for registration in October, the site is conducting pre-registration this week (opening July 31st, the birthday of both Harry and J.K.R. herself), letting the first million to “find the magic quill” register for the site and, presumably, help shape it over the coming months.

The Magic Quill — never mentioned in the books but regarded as canon — is the enchanted quill that writes down the names of every magical child born in preparation for the day eleven years later when they will receive their Hogwarts acceptance letter. As part of the Pottermore challenge, every night/morning at an unspecified time, Pottermore would display a clue, which you would then be required to solve and enter into the end of the provided URL, where you would find the quill, leading you to the registration page. Now, knowing Potter fans (I have to admit they are my favorite brand of crazy and I am every inch one of them), this automatically led to declarations of “I AM NEVER SLEEPING AGAIN UNTIL I GET THAT REGISTRATION,” followed by page-refresh sessions that looked something like this:

Somewhat (read: incredibly) frustrating for those on the East Coast (and I’m imagining other time zones as well), the Pottermore clue — for the first two days of the seven-day-long-challenge, anyway — has not gone live until between 3 and 5 in the morning. And while these late-night Harry Potter freak outs surely make my Tumblr dashboard a lot more interesting, it’s not exactly conducive to, say, waking up early in the morning to get to work and being a productive human being.

Still, we are Harry Potter fans, we just watched our childhood die a few weeks ago, and now you’re giving us the chance to be sorted and given an official wand and no longer be classified as a muggle? WE ARE SO THERE. Failure was not an option, especially after that first night when half my friends got registrations and I didn’t, and it kind of felt like everyone had gone away to summer camp and left me at home all alone to mow the lawn all summer, but it was Hogwarts, so it was way worse.

For all you willing to stay awake (or, as I did, in one of my wimpier moments, have a friend call and wake you up when the time came) for Pottermore registration, never fear: There are still five days left in the challenge, and the cap is set at one million. You could still get your chance. I got mine early this morning, 5am to be exact, and while I did fall asleep mumbling to myself about the fact that it was five in the morning and most of us were probably so tired we almost couldn’t spell our names for the registration forms, I also fell asleep mumble-yelling “I AM A WIZARD!” so…wash…It was totally worth it. 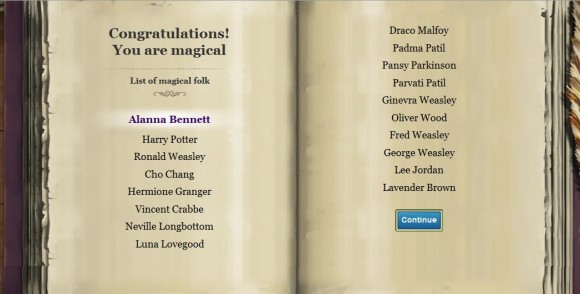 And if you do fail to get in, please remember that although it might feel like it right now, it is certainly not the end of the world. Registration opens to the public in October, and you can join the rest of us then.