Pirates of the Caribbean 4: You Seem Familiar? Have I Watched You Before? 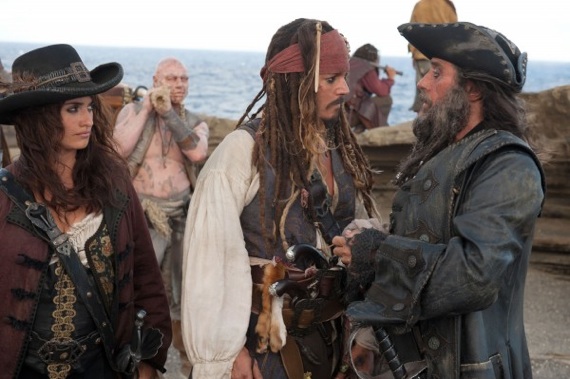 “You seem familiar. Have I threatened you before?” It’s a question Captain Jack Sparrow likes to pose, and it’s one that might give you pause, or just a wicked sense of déjà vu. A disturbing sense that we’ve been threatened before is exactly what you can expect from Pirates of the Caribbean: On Stranger Tides, a dour, bloated whale of a summer movie. For two-and-a-half hours, you can follow along the worn dreadlocked wig of Captain Jack Sparrow as he searches, with about 300 supporters, for the Fountain of Youth. I was wishing for the fabled Fountain about twenty minutes in, because if it’s one thing that the fourth episode of Pirates made me feel, it was old. Grabbing a cutlass and slashing to the quick; POTC 4 is an over-long, overcrowded, boring ride, if your definition of a ride is a rattling wooden crate on some very rickety track.

And overcrowded it is. Every single frame of the good ship Pirates of the Caribbean: On Stranger Tides is bursting with enough carefully distressed wigs, dirtied extras, and smoked details that I can barely remember a moment. It was as thought the production, afraid its audience might get bored and wander away, wanted to cram in as much extra rigging for us to stare at as possible. Everything is extra rigging in this hulking, creaking beast, from the familiar catchphrases to the eerily repetitive set pieces. Any movie should be worried about itself when it’s earnestly cramming in casual cameos from the likes of Dame Judi Dench, Richard Griffiths, and Roger Allam (known to most of you as The Voice of England in V for Vendetta). POTC 4 takes no heed, and no pause, as it lurches along to its final destination.

Visual overcrowding, made all the worse by pore-revealing HD, is bad enough, but this swashbuckler suffers from that most terminal of blockbuster illnesses, TMB, or, Too Many Badasses. Nearly every person who swaggers across the screen is tanned, textured, and armed within an inch of their SAG contracts. Everyone is amoral, scarred up, with a nasty reputation and bad teeth to match. Even the young chaplain who shows up to provide a little forced straight-facedness ends up shirtless, sword in hand, blood dripping across his abs. What results is a sort of bland continuity in which a participant is neither charmed nor repulsed, only tired.

When the original POTC and its damaged sibling sequels came out, it was easy as all stereotyping to complain about those perpetual plot deadweights, Will and Elizabeth. Remember them? They were the future Oscar-nominee Keira Knightley (couldn’t have called that one in a rigged race), and the now-and-forever doomed to wear poofy period shirts, Mr. Legolas himself, Orlando Bloom. They were the Lovers in a cast of clowns, and yes, they were tiring, and they were the source of much fan derision. But without a terminally sincere couple to play the straight men, there’s no contrast to play off of for the likes of Johnny Depp’s craaazy caricature. Precisely the reason Depp’s Sparrow, Gibbs, and the scene-chewingly exciting Geoffrey Rush were so memorable is that they weren’t Will and Elizabeth. They weren’t the protagonists. They were the cool kids dropped in to ruffle the 18th-century ruffles, and seeing them sparingly was great fun. An entire movie of the same, though, is an enormous box of the same treat; bland, and likely to put one off the stuff.

I’m of the school of criticism that says you have to take a piece for what it is, not what it isn’t. POTC, no matter what you put after that inevitable title colon, was never meant to be high art or high drama. It’s meant to be fun, and that’s exactly what’s lacking in this fourth trundling addition. Any sense of fun. There’s an odd thread of cruelty running through the cloth of the movie, as the screenwriters take a misstep in attempting to prove how thoroughly badass everyone is, we swear. They’re pirates, we get it. They’re not nice people. But around the third time the death of a long-standing secondary character was unceremoniously played for laughs, even the twelve-year-old sitting next to me in the multiplex wasn’t finding any of it amusing. Except for a gag involving the desire for dessert (and that’s not innuendo), and a nice talky bit with Rush and Depp, the few jokes the film tries come across dank and damp as the seaside air.

If you’ve a hankering for some good old swash-swash, buckle-buckle, I would save yourself the cash and re-watch the first POTC outing. Sometimes the best cure for nostalgia is to cut right to the source, with a machete if need be. Savvy?