Posterous Shutting Down at End of April | The Mary Sue

Posterous to Turn Off the Lights at End of April, Just Over One Year After Being Acquired by Twitter 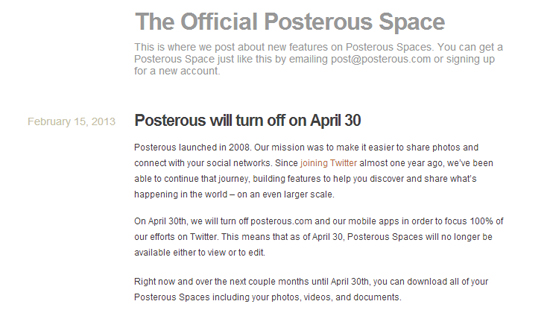 Posterous is one of those social media startups that never seemed to find a specific place to call its own on the Internet. It’s not like we don’t already have Facebook, Twitter, and Pinterest, among others. That was before it was acquired by Twitter last March. After just over a year of pretty much doing nothing with Posterous, it’s been revealed that Twitter will be shutting the service down on April 30th. All five people that were still using the service will surely be very distraught.

It’s not like Twitter hasn’t already folded the meat of Posterous’ team into their own operation. There’s likely only been a skeleton of a skeleton crew keeping the service running. If Posterous is something you actually use, or did use, you can download whatever videos, photos, and documents were on the service. Here are the steps you need to take to do so, straight from Posterous’ blog:

See? That wasn’t so hard.

If the closing of Posterous hits you particularly hard, there’s always Tumblr, or like a million other small versions of both. People can’t get enough of that social media, it seems.