And we love it. 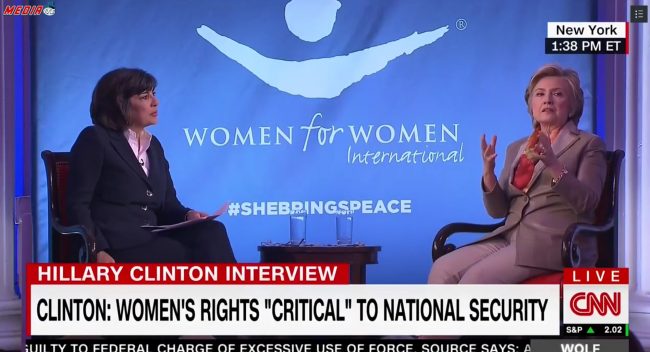 As much as I wanted to see Hillary Clinton become the U.S’s first female President, it’s also refreshing to see her free of the demands and harsh scrutiny and criticism of the campaign trail. Free to be way more loose with how she expresses her thoughts and feelings. And I love it.

At the Women For Women International conference in New York yesterday, Clinton sat down for an interview with CNN’s Christiane Amanpour to talk about the issues facing American women. When Amanpour asked her directly whether she thinks that misogyny played a role in the outcome of the election, Clinton did not mince words or facial expressions:

Clinton does believe it played a role (as does anyone with, you know, eyes and ears), and she joked, saying “the book comes out in the fall.” I’m sure she has all sorts of things to say regarding the election. When Amanpour continued the questioning, asking her, “Were you a victim of misogyny, and why do you think you lost the majority of the white female vote—the security moms, the people who want to be protected from the kinds of challenges you’re talking about right now?”

Clinton replied, “I think other things did as well. Every day that goes by, we learn more about some of the unprecedented interference including from a foreign power who is not a member of my fan club. And so, it is real, it is very much a part of the landscape politically, and socially, and economically.”

She also takes a moment to remind everyone that, despite her loss, she had 3 million more votes than her opponent in the last election. Just because she lost the game of the election doesn’t mean she doesn’t actually have more people in the country who actually support her. With that kind of support behind her, she can continue to do good work on our behalf, Presidency or no Presidency. It might seem like small consolation, but considering current events, I’m taking anything I can get.

(via Mediaite and CNN, image: screencap)