The Pope Is Open to Baptizing Extra Terrestrials | The Mary Sue 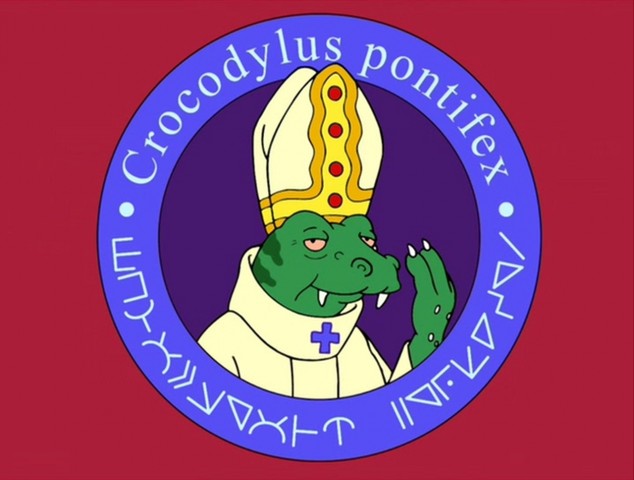 You know all those really inspiring parts of the bible that talk about how Jesus loves the little aliens? No? Right, that’s because they don’t exist. But if Pope Francis has anything to say about it, any interested members of an unknown intelligent race of galaxy-traversing beings in search of a new religion are 100% welcome in the Catholic Church.

In a homily on Monday about the dangers of “closing the doors” on people interested in Catholicism, the Pope compared Simon Peter’s baptizing of the unclean and uncircumcised to the baptism of another inconceivable group of possible converts:

“That was unthinkable. If—for example—tomorrow an expedition of Martians came, and some of them came to us, here… Martians, right? Green, with that long nose and big ears, just like children paint them… And one says, ‘But I want to be baptized!’ What would happen?”

Note that he envisions a scenario in which the alien actively seeks out a change in religion and doesn’t suggest that we try to force it on them, which is great, because the latter type of rhetoric feeds into problematic colonialist and imperialist ways of thinking. But also, I suspect that maybe Pope Francis just doesn’t want to piss the aliens off. After all, almost every science fiction story our species has ever written suggests that they’re going to have way bigger guns than we do when they inevitably come knocking on our door.

Of course, the Pope’s main point isn’t “don’t piss off aliens.” It’s “don’t be a dick to people who are interested in your thing.” The thing just happens to be religion in this case. He continues:

“When the Lord shows us the way, who are we to say, ‘No, Lord, it is not prudent! No, lets do it this way’… and Peter in that first diocese – the first diocese was Antioch – makes this decision: ‘Who am I to admit impediments?’ A nice word for bishops, for priests and for Christians. Who are we to close doors?”

We could all learn a thing or two from the Pope right about now. Lookin’ at you, self-appointed arbiters of “fake geekdom.”

(via BoingBoing, image via Futurama)