Amy and Rory Pond May Be Leaving Doctor Who? 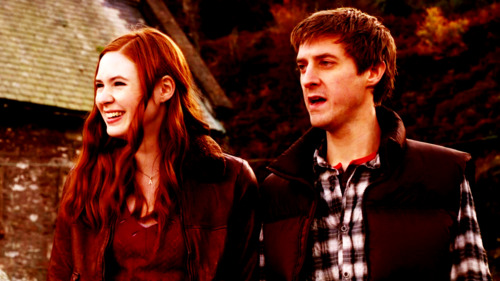 As all who watch Doctor Who know, it’s best not to get too attached to certain actors or their characters. When you’re traveling through space for eternity people tend to come and go. But still, absolutely none of this stops people from getting very attached, especially to married couple Amy and Rory Pond. And now Karen Gillian and Arthur Darville might just be leaving the show.

According to a “source” at the Daily Star, (Finale Spoilers):

“There are going to be a lot of tears in the finale. The Doctor will set off in the TARDIS for his next adventure on his own. Amy and Rory will be reunited with their baby Melody Pond and they make a decision to stay on Earth to settle down as a family….TV bosses are aware the couple have been popular so this won’t be the last you see of them.”

This meshes with a lot of other news that has been circulating about the show: Darville is currently starring in Christopher Marlowe’s Doctor Faustus at the Globe until October, but the series picks up filming in September. On the flip side, Gillian recently confirmed that she would be appearing in more episodes, but she didn’t give details, so it is entirely plausible that the couple will depart during the second half of season six, but then return at some point in season seven.

The pair has no doubt been a popular addition to Doctor Who, but given the show’s turnover rate this can hardly come as too much of a surprise.
(Doctor Who TV via Cinema Blend)

(Photo via Come Along Caps)