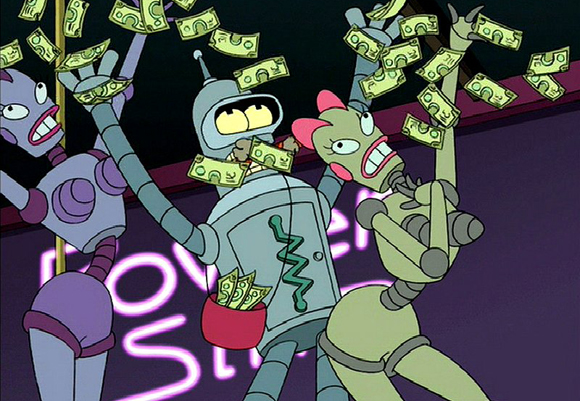 If only this were just a plot to an upcoming episode of Futurama. It’s not. Some interesting technology made an appearance at this year’s CeBIT computer expo this week in Hannover, Germany. Not one but two pole-dancing robots. I’m really not making this up.

Microsoft, Google, and Intel were among the companies showcasing new ideas at the convention. Here it is…

As you can probably imagine, this flexible robot was one of the most popular exhibits at CeBIT this year. “The sleek, white, life-sized humanoids, with camera-shaped lights as heads, gyrate suggestively to the music, provided by a third ‘DJ’ robot, with a megaphone for a head, who bops around the stage in time to the beat,” writes AFP.

“Event manager by day and part-time DJ by night,” Julian Hangschlitt explained to the press, “Last year, we had a pair of real dancers. This year, we thought, ‘well, we’re coming to CeBIT, it’s a tech fair, we should have some robots instead.'”

Ahem. Translation: “Robots and strippers are the exact same thing.”

The robots were designed by Giles Walker a few years ago. “[They] are driven by old car motors and their moves are controlled by computer via wireless technology. But despite being made from scrap, the robots don’t come cheap. If you want to hire these very exotic dancers for your next party, it will set you back around 30,000 euros ($40,000),” according to AFP.

And some folks have taken Walker up on the offer. I found this video on youtube from 2008 of the robots “performing” at Mutate Britain. Beware: this is UBER creepy and also features a robot “drunk.”

Now, I watch sci-fi, I realize inventions like this are inevitable but how about SINCE YOU CAN INVENT ROBOTS, you make them for important stuff first before we get around to making them for entertainment purposes? I just feel like it’s a terrible use of brain power.