Happy 15th Anniversary, PlayStation: This is Your life 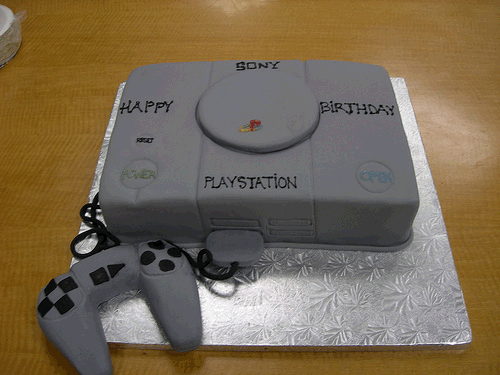 While celebrating the original PlayStation’s 15th anniversary of its North American launch and thanking Sony for the years of fond gaming memories, it helps to know from exactly where the console that brought gaming to the forefront came.

Once upon a time, the gaming market was controlled by a company that used a stereotype of a pudgy Italian plumber as their mascot. The plumber’s creators, a company with a wacky name that roughly translates to “leave luck to heaven,” Nintendo, dominated the console and portable gaming market during the market’s infancy. A speedy blue hedgehog appeared and made a run (ahem) at the seemingly invincible Nintendo, with its creators, Sega, carving out a piece of a Nintendo-dominated market.

Sega and Nintendo fought one of the closest battles in console history, with the Genesis and Super Nintendo Entertainment System creating the first rift between the gaming community, one that would lay the groundwork for future console wars. Closely fought, Nintendo’s SNES won out, but it left Nintendo with a bitter taste in its mouth. Though Nintendo won, the first real console war wasn’t a walk in the park, with Nintendo flailing at certain points in the battle.

Possibly in part because Sega gave Nintendo a scare, or possibly in part due to Sega pushing ahead with technologically advanced (at the time) 32-bit graphics and a CD-ROM attachment, Nintendo had a contract with Sony to develop a CD-ROM attachment for its SNES. One day after Sony showed off the console at the Consumer Electronic’s Show in 1991, Nintendo backed out of their deal with Sony due to a disagreement over the profits made from the sale of the CD-ROMs, opting to partner with Philips instead, a partnership that also fizzled out.

During a meeting held in 1992 to discuss the fate of the PlayStation, Ken Kutaragi, now known as “The Father of the PlayStation,” played on the embarrassment from Nintendo and convinced Sony executives to move ahead with the project, moving the project to an entirely separate division of the company, Sony Music, in order to retain financial stability. Sony Music’s experience with creating and marketing CDs coincided with what Ken Kutaragi was trying to do with the PlayStation’s media format, the CD-ROM.

Eventually, Ken Kutaragi and the CEO of Sony Music, Shigeo Maruyama, formed the now famous Sony Computer Entertainment, Inc., which led to their PlayStation project being green lit in 1993. A year later, Sony held a conference in a Tokyo hotel which showcased the PlayStation’s 3D (not the glasses-based kind, the depth-based kind that we’ve come to know in modern games) capabilities, the relatively inexpensive development and production costs of CD-ROM media, as well as the larger storage capacity CD-ROMs had over Nintendo and Sega’s cartridge-based games.

The first Sony PlayStation was released in 1994, producing colossal sales and gaining immense popularity due to a lower price than its competitors, the ability to play music CDs as well as games, and a close-to-launch library of now famous franchises, such as Ridge Racer, Suikoden, Warhawk, Tekken, Wipeout and Resident Evil.

Eventually, the success of the PlayStation led to the PlayStation 2, a console that ended up being a global sales phenomenon and once pushed the famed Nintendo to the brink of destruction. The popularity of Sony’s PlayStation brought video games to the world, no longer relegated to a niche market.

Happy 15th anniversary, PlayStation, thanks for all the memories. Even if you were, in part, created out of revenge.