Remember the Ninja Turtles Pizza Launcher toy? It hurled little plastic pizzas at your enemies. That’s just a toy right? Certainly, no person would be insane enough to build a real life machine that tosses pizzas! It turns out that Pizza Hut is an entire company of people exactly that insane. They built one and they’re showing it off at San Diego Comic-Con. The hubris! 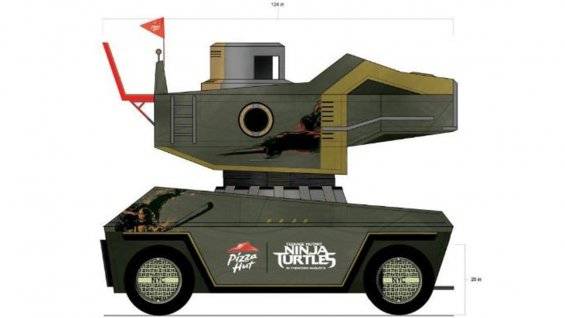 Pizza Hut released a trailer for the pizza thrower leading up to Comic-Con:

This is of course a tie-in to the upcoming Michael Bay version of Teenage Mutant Ninja Turtles which looks… different. But even if the movie is the sum total of all our fears about it, it will have given this world a giant machine that throws pizza. That’s a win for everyone. Unless you’re on the business end of a flying pizza.

(via The Hollywood Reporter, image via Pizza Hut)