Final Fantasy XV's clothing may only have one color, but its fashion is far from basic.

Spoiler alert: this article contains minor spoilers for the latter half of Final Fantasy XV.

It took an entire decade of development before release, but we finally got a brand new main Final Fantasy title with the release of Final Fantasy XV at the end of November. Promised to be a “Final Fantasy for fans and newbies,” it definitely delivered, reinvigorating the series in a way that I didn’t know was still possible. Final Fantasy XV is a game that definitely surprised me, and I’m glad that the sales figures agree. More super weird Final Fantasy games please!

I’ve written a bit about Final Fantasy games for this column in the past, and have mentioned that this series has always had a fairly strong point of view when it comes to its clothing and costuming, even when graphics weren’t nearly as detailed as they are now. Final Fantasy XV continues that tradition, and it makes full use of the graphical capabilities at our disposal in a way that most big games don’t bother with. The clothing of Final Fantasy is often lush, detailed, and interesting. When it rains, you can practically feel the way Noctis’ cotton jacket clings to his skin. If you spend several game days down in a sewer without stopping to rest, you leave that sewer looking like you did just that. If you run around a desert all day, dust might cling to a character’s jeans. There is a level of detail in this game present in even the smallest things—even Ignis’ glasses have a prescription. 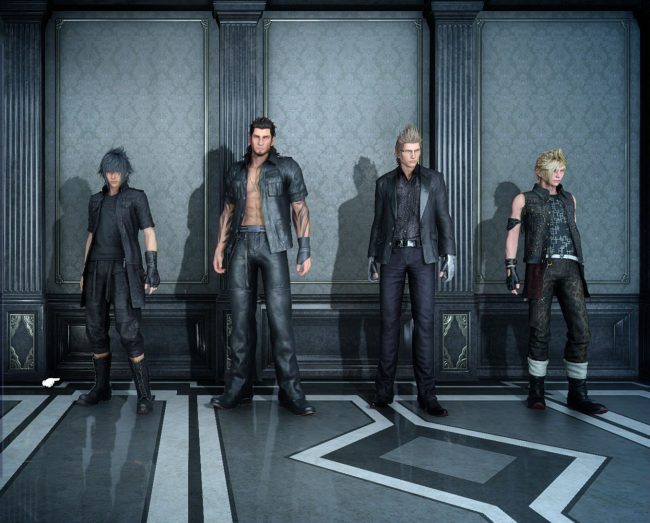 What’s also interesting about the clothing in the game is how limited the color palette is. All four leads wear black, and black and white is explicitly the color palette of everyone you meet from Crown City. The clothing of people from Crown City, including Noctis and his friends, is explicitly trendier and more expensive looking than those of the people who don’t live in cities, and that makes sense. Final Fantasy XV is not the first game to make use of black as the sole clothing color palette, but it’s definitely the best. Every outfit is designed to suit the character wearing it, and while at first glance they might seem boring, they’re far from that. 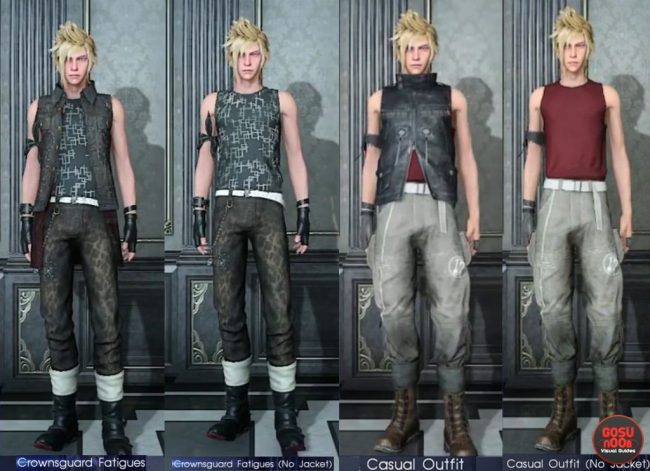 These outfits make good use of texture, pattern, silhouette, proportions and fabrics. You can tell what kind of fabric each piece is made out of. They also use different shades of black to create visual interest. Subtle embroideries (Noctis has a skull on his jacket) create texture. Prompto’s look in particular is impressive. He’s got no less than three different patterns going on in his look, at least that many different kind of fabrics (denim, cotton and flannel) and they really played with proportion by having him go sleeveless and rolling up the cuffs of his leopard print jeans. Best of all, it fits his personality perfectly. The Final Fantasy XV designers understand how to make a limited color palette like this interesting in the way that an actual clothing designer would. If you don’t believe me, check out Alexander Wang’s most recent fall collection, which was shown just a few short weeks ago. It’s technically a women’s collection, but there is definitely a lot in there I could see our Crown City boys coveting (like all of the boots).

There’s another reason why I think black was picked explicitly as the color of choice for the residents of Crown City. It’s not just because it’s considered cosmopolitan to wear black, but also because Final Fantasy XV is a game about grief. This is a game that starts out with the complete decimation of almost an entire city. Everyone you meet from Crown City is grieving someone, including Noctis, who lost his father. I don’t think it’s a coincidence at all that a color that often represents mourning was chosen for this game. The only other color on the lead characters is red, the color of blood, which is only on the soles of the shoes, likely a nod to shoe designer Christian Louboutin. 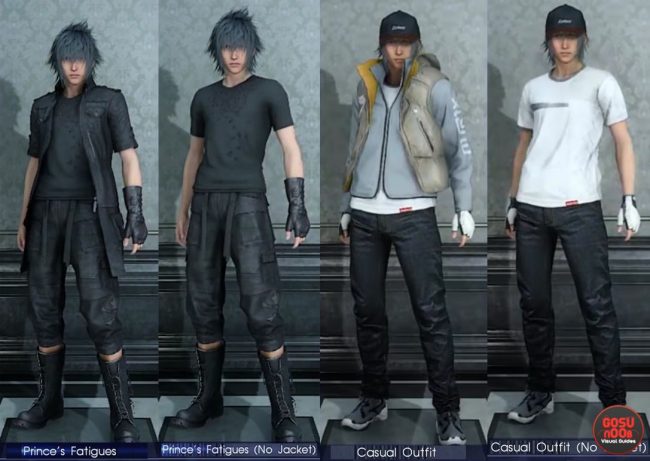 But these aren’t the only outfits our car boys wear. There’s also their alternative casual outfits. Now, I never really wear these, admittedly. Personally, I think they all look weird on them, with the exception of Prompto. But once I thought about it, I realized that this, too, was probably intentional. Prompto is the only civilian of the bunch, and also the most creative, so it makes sense that his casual outfit would still reflect his personal style. But for the other three, not so much. But an important thing to remember about Noctis, Gladio, and Ignis is that they’re all from the palace. Gladio is part of the Crownsguard, and used to wearing a uniform. Ignis is essentially a Lord Chamberlain in training. Not people who probably get a lot of occasions to dress informally. So of course their casual outfits look weird. I think Noctis’ is the worst though. It’s a drab brown parka! He looks so strange in it! And then I realized: he probably did not pick this outfit out himself. He’s a prince! A servant probably picked this out, and that’s why he looks so odd in it. It’s also a city person’s idea of what someone might need to wear in the country, or on vacation. I think Gladio and Ignis’s outfits reflect this as well, though not to the extent that Noctis’ does. Their outfits are supposed to mark them as outsiders, and I think even these casual outfits do as well.

But another thing that’s interesting about the clothing in Final Fantasy XV is the way that they hint towards a fairly important thing about the game’s plot. A lot of early criticism I see from people who start this game is “why are these kids messing around so much after almost everyone they know just died!?” But a thing that I didn’t really realize until fairly late in the game is that they absolutely aren’t taking it seriously, Noctis in particular. Noctis has never really taken his duty as a prince seriously, and he fails to do so for quite a long time. It eventually becomes a major point of contention between himself and his friends. You don’t really realize until Chapter 13, when he finally puts on the Ring of the Lucii. He wasn’t ready until that point. And they are very careful to make sure that the ring is very visible. 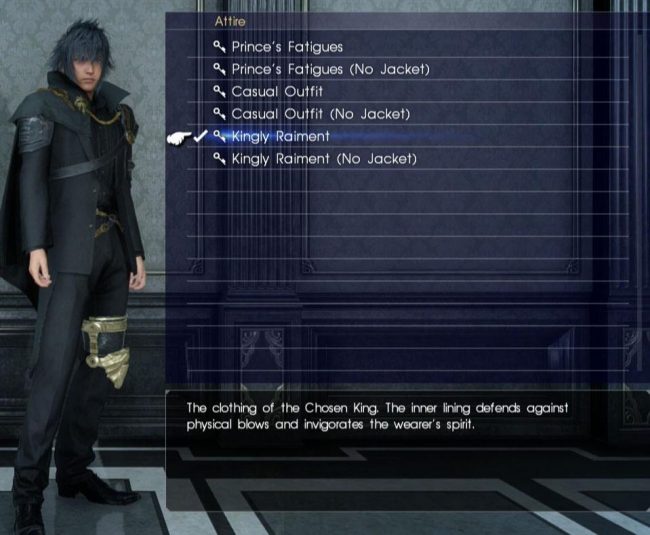 But this is also signaled by a very important costume change at the end of the game, when you finally return to Crown City. Noctis finally dons the Kingly Raiment (which is the clothing that you see his father wearing), and his companions put on their Kingsglaive uniforms. Unlike their earlier clothing, which is also meant to be a royal uniform, this actually looks like a proper uniform – the military elements are strong, and there is no individuality to these. This costume change shows not only that Noctis is finally ready to fulfill his destiny as king, but that his companions are united in purpose by his side. You can return to the past at almost any point in the game once you reach a certain point in order to finish sidequests, and it’s also important to note that this doesn’t unlock as a clothing option until after you finish the game. What’s also interesting about this is how silly Noctis looks in it in the past. It fits, but the proportions are all off, and it looks like he’s wearing his father’s clothes in a way that it doesn’t when you first get this outfit. I think this also hammers home how this outfit, and literally his kingship, is something that takes maturity and growth and experience to fit into.

Final Fantasy XV probably has the most cohesive costuming in a series that’s always been aesthetically very strong. They took something that is almost a cliche in videogame design, namely a bunch of dudes in all black clothing, and gave it style and meaning. They not only fit the characters but also tell us a lot about them, and even when an outfit seems like a misstep, there’s a pretty reasonable explanation for why it is that way. They take us on a journey, much as the game does, and that’s what good costuming does. It’s as much of a storytelling device as anything else in a game. In Final Fantasy XV, it really feels like the developers knew what they were trying to express with the clothing, and then they made it work.

Megan Patterson is a freelance writer and the science and tech editor at Paper Droids, a feminist geek culture site for women. You can also find her on Twitter crying about how good Dr. Beverly Crusher’s hair is.