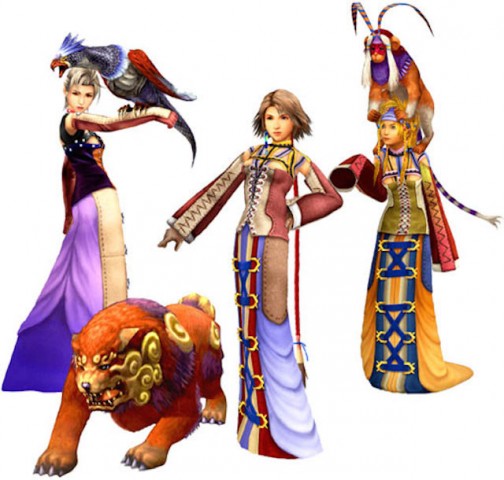 For more video game fashion, check out the rest of the Pixelthreads series.

The Final Fantasy series has always had a very strong sense of what its characters should wear. Even back in its 8 and 16 bit days, you knew what your characters and even enemies were wearing, and it usually wasn’t like anything else you saw in the genre. Part of this was from necessity: Final Fantasy games tend to have a lot of characters, and there needs to be a way to distinguish between them. But they were never satisfied with doing armour the same way that everyone else was, or following traditional fantasy tropes when it came to clothing, and every character always had their own distinct look while remaining cohesive to the world as a whole.

This is largely in part because of Square’s commitment to their character designers, Yoshitaka Amano and later Tetsuya Nomura, who always infused their characters with a distinct sense of style. Amano is much more traditional fantasy, dreamy, ethereal, while Nomura’s always tap into the current zeitgeist of young, modern Japan. Final Fantasy 7 in particular is notable for having character costume designs that remain recognizable even when rendered at lower polygons, largely through Nomura’s use of colour. Even as graphics started getting better and better, Final Fantasy games continue to push the boundaries of videogame style, especially in terms of what a fantasy RPG should look like.

I’m not ashamed to come out and say it: Final Fantasy X is my favourite Final Fantasy game. I understand that this is not a popular opinion, but it’s one I’ve come to over the years. I identify with it in a way that I don’t with any other Final Fantasy game, particularly as I’ve gotten older. I think it is a much deeper game than a lot of people give it credit for. Yes, Tidus is still the worst, but the game isn’t really about him. It’s about Yuna, and her journey, and he is mostly there as a foil to help us learn more about the world, a way to offer us explanations of Spira and its culture, since he doesn’t know anything about it himself. Yuna’s costume is also one of my favourites in any game I’ve ever played, a beachy twist on a traditional kimono that signifies her ties to tradition, and marks her as the reserved young woman that she is. But I’m not here to talk about Final Fantasy X, not really. I want to talk about Final Fantasy X-2, the only Final Fantasy title to feature an all-female cast (one of a very few), and a game where Yuna eschews that look entirely.

In FFX-2, gone is the long pleated skirt, the kimono sleeves, the summoner’s staff, for almost the complete antithesis of that: tight little jean shorts with a half skirt that looks like a wave, a crop top, and a gun. The change might seem drastic, but I think it makes sense: after defeating Sin for good, the life that Yuna led, the role she was forced to inhabit, is now gone. Let’s not forget that she had fully accepted that she was going to die if she completed her pilgrimage, and let’s also not forget that she’s 17/19 years old. Trying a new, sexy look is something that I think we all go through at that age, regardless of whether or not we saved the world and escaped what we thought was our inevitable death. (I know I certainly did.)

Yuna’s clothing choices in the first game really reflected her role within Spira: the nods to traditional Japanese culture are meant to evoke that, but now Yuna is in a position she’s never really been in before, where she gets to reclaim some of her own identity for herself. She’s still a source of inspiration for Spira as the summoner who stopped Sin, but since the role of summoner is now redundant, she is able to decide what that means. I think it’s rather realistic that she would do so by swinging for the fences and picking clothing that is almost comically sexy for her, something I also remember doing when I was 19. It’s kind of endearing, even.

FFX-2’s dressphere system isn’t exactly unique to this game: it’s a new take on the classic Final Fantasy job system, which was used in Final Fantasy III, Final Fantasy V, and Final Fantasy Tactics. The job system continues to be used in other Square titles like the Bravely series, and the switch in classes is always represented with a costume change. That’s because it makes it easier for the player to know which class they are currently using, as well as giving an opportunity for (let’s be realistic here) max kawaii. But in Final Fantasy X-2 the dresspheres do go a little bit deeper than just a simple costume change, though the costume changes are in themselves pretty impressive: there are 16 of them, each with their own unique style, and each customized to fit the personal style of each of the three playable characters. Because there are only three playable characters, this system is kind of necessary, since you don’t have as many characters with their own unique class specialties.

It provides a bit of a tactical element to gameplay as well; often crucial to winning boss battles is knowing which classes will be most effective against an enemy. But these costumes are not merely window dressing for the characters: each comes with their own personas as well.  For example, with the Berserker class, characters’ entire posture changes: they’re lower to the ground, looser in the limbs, while a white mage is very upright and proper. These aren’t just costumes, but identities that the characters, particularly Yuna, are trying on.

Identity is a major theme in FFX-2: Spira is trying to figure out what direction to take now that Sin is gone for good, leading to tension between New Yevon, which wishes to maintain the traditions of the past, with the Youth League, who wish to push forward into the future through the use of machina. But this is the journey that Yuna is going through as well. After the defeat of Sin, she spends two years in relative seclusion, and it’s not until Rikku draws her out with a sphere containing a young man that looks a lot like Tidus that draws her out again. The story becomes just as much about who Yuna decides she wants to be after venturing out in the world again as it does the changes that Spira itself is going through.

As mentioned before, this is of course represented by Yuna’s pretty drastic makeover, but it is reinforced through the dresspheres as well. She doesn’t know how to fight not as a summoner, and the dresspheres become a way for her to do that. The dresspheres are not just a battle system, but a representation of the journey that Yuna is going through as a person, figuring out who she is going to be as an adult for herself and for the people of Spira. (Hence the popstar stuff: how better to remain a source of inspiration for the people in a time of great flux than through song?) You unlock new and more powerful dresspheres the farther along you get in the game, the more you travel, the more Yuna discovers about herself. She becomes a little tougher, a little wiser, a lot less willing to be rode roughshod over by others for the greater good, and the dresspheres give her the power and experience to do this.

Final Fantasy X-2 actually took some heat for their decision to the use the dressphere system, even though it’s not that much different from any of the job systems the series had used before. (In fact, it’s actually probably harder, given how speeded up combat is.) It is often deemed as “superficial” and even sexist because it’s the only Final Fantasy title with all-female leads.

However, I don’t think that really gives the game’s creators any credit. What I’ve hoped to show here is that the decision was not just a superficial one, but one that makes sense for the story and the characters. It’s a good example of how a game can mechanize clothing and make it meaningful. It’s a good example of how we use clothing to figure out who we are, and how we want to be seen by the world. But hey, it doesn’t hurt that these costumes are cute, either. There is room for both meaning and beauty, in both games and in fashion.